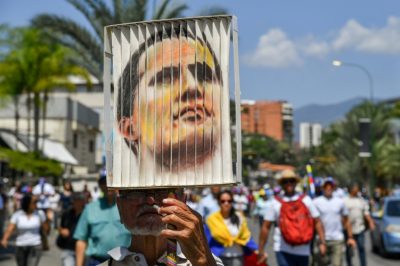 Flag-waving Venezuelans turned out Monday to await the return of opposition leader Juan Guaido, who is defying the threat of arrest as he embarks on a renewed push against embattled President Nicolas Maduro.

In a video shared on social networks, Guaido warned that if Maduro’s government “tries to kidnap us … it will be one of the last mistakes it makes.”

The self-declared acting president added on Twitter that should he be detained, he has left “clear instructions to our international allies and parliamentary brothers.”

Guaido left Venezuela 10 days ago in an unsuccessful bid to force through desperately needed humanitarian aid stockpiled in Colombia.

He then went on a tour of regional allies Colombia, Brazil, Argentina, Paraguay and Ecuador before calling his supporters onto the streets for his return on Monday.

Guaido’s reappearance in Venezuela would pose an direct challenge to the embattled Maduro, who must decide whether to arrest him for defying a travel ban — thereby provoking strong international condemnation — or allow him to enter unmolested, which would undermine his own authority, analyst say.

“Any threats or acts against (Guaido’s) safe return will be met with a strong and significant response from the United States and the international community,” said US National Security Advisor John Bolton in a tweet.

Guaido, who has been recognized by more than 50 countries as Venezuela’s interim president, did not say how or when he would return, though speculation is rife that a flight from the Colombian capital Bogota to Caracas is the most likely route.

However, he could slip across the border with Colombia in the same way he left Venezuela, claiming on that occasion that he had help from Maduro’s military.

The military continues to maintain a border blockade ordered by Maduro to prevent the entry of humanitarian aid, supplied mostly by the United States.

Guadio says 300,000 people face death without those supplies of food and medicine.

Venezuela is in the midst of a humanitarian crisis with poverty on the increase after four years of recession.

Hyperinflation has hit the currency hard, obliterating salaries and savings, while 2.7 million people have fled the country since 2015, according to a UN estimate.

Defying a Venezuelan government travel ban, Guaido crossed into Colombia on February 23. While there he met with visiting US Vice President Mike Pence.

The 35-year-old political newcomer then traveled to Brazil, where he met the country’s new right-wing president, Jair Bolsonaro.

In a poke at Maduro during his trip, he said he was invited to visit Chile later this month.

Guaido, who heads the opposition-led National Assembly, stunned the world on January 23 when he proclaimed himself Venezuela’s acting president after the legislature declared Maduro a usurper and illegitimate over his May 2017 re-election, which was widely criticized as fraudulent. Maduro’s new term in office began on January 10.

Guaido wants to oust Maduro and set up a transitional government and call new elections.

Guaido “must return to Venezuela and continue to press internally, as the international support is enormous,” Eufracio Infante, 64, a Venezuelan lawyer and history teacher, told AFP.

“We are facing a very delicate situation and every minute we are approaching an outcome we hope will not be catastrophic,” he said.

Maduro enjoys strong support from Russia, which accuses Washington of interventionism, and China, which is concerned over the fate of billions of dollars in loans to Maduro’s regime.

The socialist president warned last week that Guaido should “respect the law” and would have to “face justice” if he returns to the country.

Guaido said last week he intended to return to Venezuela “despite threats” to arrest him.