HomeNationalDanjuma: If I reveal what is going on in Nigeria, many people...
NationalNews

Danjuma: If I reveal what is going on in Nigeria, many people won’t be able to sleep 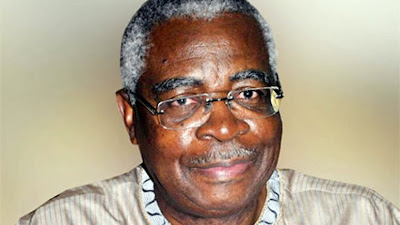 A former minister of defence, Theophilus Danjuma, has claimed many Nigerians won’t be able to sleep if he revealed what is going on in the country adding that Nigeria is in a big hole.

Danjuma said this at the International Conference Centre, University of Ibadan, during a book launch by the Nigerian Tribune.

Blaming activists in the south-west of losing their voice, Danjuma said if he disclosed what is happening in the country, people would no longer sleep.

The retired army general asked the silent activists to wake up and save the country from the “fifth columnist” who have put the country in a hole.

“In Yorubaland, everybody seems to have lost their voice. People appear not to care about what is happening. If I tell you what I know that is happening in Nigeria today, you will no longer sleep,” Danjuma said.

“If you want details, I will give it to you privately. We are in a big hole as a nation. And people who put us in this hole have continued today. So, we have to wake up.

“We are the ones who can save ourselves. The fifth columnist activities going on among your people are not helping matters.

“May Almighty God continue to bless this country. But only we can save ourselves from ourselves.”

The elder statesman has been very critical of the government of President Muhammadu Buhari.

Last year, Danjuma, who once served as chief of army staff, accused the army of failing in its responsibility to defend the nation.

He also asked Nigerians to rise up and defend themselves or risk being killed.