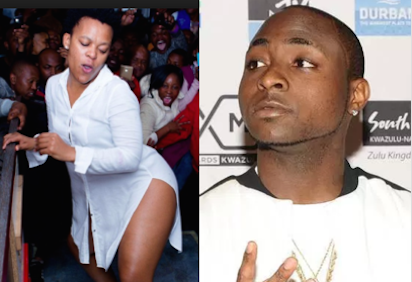 Nigeria’s singer, Davido is set for a collaboration with South Africa’s sensational dancer, Zodwa Wabantu, who normally dances on stage, without wearing a pant.

Reports monitored on Zimbabwe’s Herald indicate the collaboration between Davido and Zodwa, who is known as Queen of Vosso, is being arranged by Afrotainment boss, DJ Tira.

The report also said Davido had sought Tira’s help to get Wabantu to feature in his upcoming music video.

“Hello @DjTira I wanna ft Zodwa Wabantu on my upcoming music video. How can I get hold of her? “(sic), he tweeted.

No date has been announced yet for the said shooting of the video.

According to TimesLive, Zodwa, a Durban-based dancer has been grabbing headlines for her racy outfits and habit of not wearing panties.

“Zodwa is a wonderful person, who is a born entertainer. After we were booked by the same client in the UK, we developed a working relationship where Afrotainment now handles her bookings, which start from R25k. She gets bookings from all over, places like Botswana and Swaziland,” Tira told TimesLive.

The dancer was banned from appearing at the Harare International Carnival in Zimbabwe last year because the organisers wanted her to wear panties.