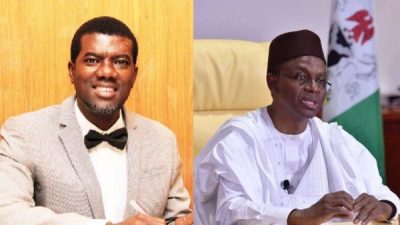 A former aide to ex-president Goodluck Jonathan, Reno Omokri has said the Governor of Kaduna state, Nasir El-Rufai’s ‘sanity is in doubt’.

He stated this in his reaction to a statement made by the Kaduna governor, warning that foreigners who intervene in the forthcoming general elections will “go back in body bags.

The All Progressives Congress (APC) governor made the threat when he featured on NTA’s Tuesday Live programme anchored by Cyril Stober.

Reacting to El-Rufai’s threat in a statement made available to the media, Omokri urged El-Rufai to rather use repentant Boko Haram members as ‘body bags’ rather than foreigners.

He said, “El-Rufai is a man who talks carelessly, especially when he is off his medications and his Sanity is in doubt”.

The former presidential spokesman wrote: “Today, I woke up in shock to watch a television interview by Mallam Nasir El-Rufai, the Governor of Kaduna State, on the Nigerian Television Authority where he threatened Nigeria’s friends with death if they intervened in Nigeria.

“His exact words were “we are waiting for the person that will come and intervene (in Nigeria), they will go back in body bags.” Shocking as his words may be, this is vintage El-Rufai, a man who talks carelessly, especially when he is off his medications.

“I first encountered Nasir El-Rufai in 2009 when he was living in exile in the United States and the next year, he appealed to me to help him write a letter to foreign governments, calling on them to INTERVENE in Nigeria (the very thing he is now preaching against today). In case he wished to deny, I have the emails and I am a meticulous record keeper.

“This latest instance of hypocrisy is the most recent in a long line of hypocritical actions by a man who has no morals and acts without conscience. Permit me to give a few instances of his previous acts of hypocrisy.

“On October 1, 2015, Nasir El-Rufai falsely alleged that former President Jonathan spent a whopping ₦64 billion on Independence Day celebrations, during his tenure when in fact only ₦333 million was spent.

“After he was exposed as a liar, Nasir El-Rufai neither apologised nor showed any remorse. It must be stated that it was the Secretary of the Government of the Federation under the Muhammadu Buhari Government that exposed El-Rufai’s lies.

“Nigerians may also recall that on September 10, 2014, this same El-Rufai falsely accused former President Jonathan and former CAN President, Pastor Ayo Oritsejafor of founding and funding Boko Haram to the tune of N50 billion. Prior to that, he had repeated the same lies at an event at Portcullis House in Parliament, England, where his lies were the object of scorn.

“Interestingly, this same Nasir El-Rufai, who is notorious for spreading falsehood, engineered the arrest and prosecution of one Audu Maikori, who erroneously tweeted about some killings in Kaduna that had not happened and almost immediately apologised after he learnt of his errors.

“So widely known is El-Rufai’s hypocrisy, that he is treated with disdain by even the cabal ruling Nigeria on behalf of Muhammadu Buhari.

“His former boss, Ex-President Olusegun Obasanjo, who brought him to the limelight, had this to say about Nasir El-Rufai in his book: My Watch Volume 2 as follows:

“Nasir’s penchant for reputation savaging is almost pathological. Why does he do it? He is brilliant and smart. I grant him that also. Very early in my interaction with him, I appreciated his talent and brilliance. At the same time, I recognised his weaknesses; the worst being his inability to be loyal to anybody or any issue consistently for long, but only to Nasir el-Rufai.

“He barefacedly lied which he did to me against his colleagues and so-called friends. I have heard of how he ruthlessly savaged the reputation of his uncle, a man who was like, in the African setting, his foster father. I shuddered when I heard the story of what he did to his half-brother in the Air Force who is senior to him in age.

“Given such an evaluation, the international community is advised to treat the fellow with the contempt he deserves. The world may do well to note that El-Rufai is a man who boasted that he had paid public funds to marauders who killed his own people of Kaduna state, because he shares an ethnic affinity with them.

“So let me, as a Nigerian citizen, apologise to all friends of Nigeria, who have been threatened by this reckless fellow. Your friendship with Nigeria is appreciated by Nigerians and this flippant fellow does not speak for us in any capacity at all.

“Those views are his private views and they cannot bind Nigeria’s armed forces not mislead them to fight our international friends and partners.

“Finally, I urge Nasir El-rufai, who today threatened foreign friends of Nigeria of going back in body bags if they intervene in Nigeria, to rather urge the Buhari administration to stop releasing ‘repentant’ Boko Harammembers and use the body bags he referred to on them instead.”