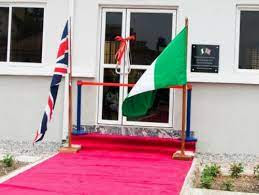 The British government and its Nigerian counterpart have signed a ‘landmark agreement’ in a new migration partnership deal.

UK Home Secretary, Priti Patel, who announced the deal on Thursday via official tweet handle said, “our new landmark agreement with Nigeria will increase the deportation of dangerous foreign criminals to make our streets and country safer,” the Premium Times reports.

Patel added that the deal will take the fight to the criminal people smugglers together to tackle illegal migration.

The development coincided with the deportation of 21 persons of Nigerian and Ghanaian origin from the United Kingdom, according to Forbes.

The Report said about 13 of them who were Nigerians were deported to Lagos while the remaining eight Ghanaians continued to Ghana.

The European human rights court, two weeks ago, issued a last-minute injunction to stop the deportation of asylum seekers from the UK to Rwanda in what would have marked the commencement of the UK-Rwanda deal announced April 14.