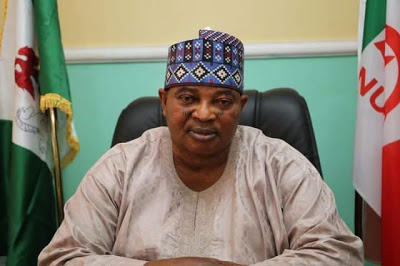 “Resident now sleep with an eye closed because aside claiming to be the new people in charge of the area, and beating anybody engaged in construction works they have not made any demand”

The transport union chief is said to be aspiring to become a King in Ogun, the state where Prince Dapo Abiodun is the Governor.

It was gathered that Baruwa who has a palatial residence in Balogun/ Mosa Onjuwon area of Ota in Ogun West wants to be the first king of the axis.

According to the online society news platform, insiders disclosed Baruwa who took over from Alhaji Najeem Usman Yasin as the national president of the NURTW in 2019 has been on the plot for “a couple of years”.

But things have taken an alarming turn that is creating a fear and panic for residents the area.

The plot for kingship has spiraled into a fight for who is in control of the land.

Baruwa backed by a splinter group from the main stumbling block to his ambition has allegedly brought in a large number of young men to forcefully assert control in a part of the area he targets via proxies.

“These people about fifty claiming they are now in control and started beating people and forcing people doing construction works to stop. They created a camp where they just smoke things with offensive odors and drink all manner of stuffs and roam the land to harass people” societynow.ng learned.

Multiple sources claim the invaders created camp with someone that cooks for them. And they kill rams and goats daily since they arrived the area “about two Saturdays ago”.

Added information has it that a counter-effort to force the invaders out by the main Onjuwon family widely known to be in control of the targeted area resulted in a blood bath.

“Resident now sleep with an eye closed because aside claiming to be the new people in charge of the area, and beating anybody engaged in construction works they have not made any demand” a source had informed.

Residents and property owners in the place have started making frantic calls to those in power to help bring the situation under control before criminal elements leverage on it to create a bigger mess for the state based on the prevailing security issues here and there.

“But there has not been any response from what I know” a source was quoted to have said.

Baruwa, the transport Union top shot who is the power behind the ascension of more popular figure Musilu Akinsanya – better known as MC Oluomo – to the position of the Lagos state chairman of the NURTW is said to have initially taken steps to endear him to the hearts of the natives of Balogun and Mosa Onjuwon and its environs before the latest move.

“He facilitated the construction of road and installation of transformers for electricity to a lot of homes among other things” societynow.ng learned.

The information at hand revealed the NURTW national president contributed massively to the development of the area, particularly Balogun his primary base in the guise of being a philanthropist.

“But the problem is that to become a King he needs a leg to stand on as a land owner, a member of the family in control of the land in that area hence the latest tactics giving residents of the area sleepless nights” societynow ng quoted a source.

Insiders assert that though a popular king in the area is passionately against the move by Baruwa, it is believed that if the Transport union top shot gets away with gaining control of the targetted area – actualizing his ambition will become easier because, with the right play, he would have increased number of original landowners backing him as well as much needed legitimacy.

NEWS: Why I abandoned Pero, Sunmbo for Annie – 2Face reveals reason for choice of wife