All The Details: Why Saraki, Kwankwaso can’t join PDP now 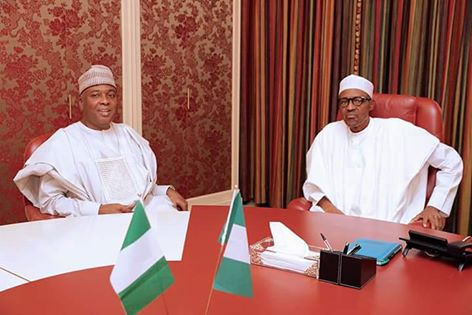 Since the pronouncement of the second term interest of President Muhammadu Buhari, both the Senate President, Bukola Saraki from Kwara State and Senator Rabiu Kwankwaso, who came second to Buhari in 2014 All Progressives Congress (APC) presidential primary election are no doubt at crossroads of their respective political expedition.

A report by firstweeklymagazine.com revealed that both men have never hidden their desire to succeed the President and fly the party’s ticket in the 2019 election and have since adopted coded and opened methods in pursuing their ambitions.

According to the report, Saraki has decided to use his foot soldiers to gauge the pulse of the people towards him by flying kites and sponsoring write-ups and opinionated articles favourable to him while Kwakwanso is oiling his political machinery from the neighbouring state of Kaduna since he’s on ‘exile ‘ from his base, Kano, a state he governed with so much gusto and likeness before handing over the baton to his then deputy and associate in his Kwankwasiyya Movement.

However, the unifying factor of these two; Saraki and Kwankwaso is the Peoples Democratic Party’s (PDP) background, while Alhaji Atiku Abubakar, ex-vice president has put the past behind him and emerged from behind the curtains to retrace his steps back to a party where he once treated like a piece of rag, both Saraki and Kwankwaso have not exhibited the kind of courage their supporters credited them with to return.

A staunch PDP member on the same pedestal with them in terms of clout and ambition told us exclusively that both men have never hidden their desire to return but one factor inhibiting there return to the PDP is the name of the party which to them has become more of a brag.

“The discussions are on-going, both are insisting that PDP recalibrate and change name, it is the only party of substance that has not undergone a name change since 1999, Look at APC for instance, they’ve adopted so many names before fussing together.

“To them, the name PDP is completely stained in the minds of Nigerians, so much odium and notoriety and impunity associated with the name.

“This situation was not helped by the kind of campaign APC ran and is still running, whenever the name comes up it is for one scandal or bad news, you can’t get any kind of meaningful campaign done in the north with the name PDP,  forget what you read on social media and some newspapers,

“The story that PDP recorded a tumultuous crowd in Katsina is hogwash. You see our banners there, look at the pictures well.

“The only part of country one can say is somewhat sympathetic to the party is the south-south and a negligible part of the south-east, don’t even talk about the south-west.

“If the party’s lords can agree to the terms of Saraki and Kwankwaso both might return but even at that, it is going to be another round of war within the party.

“We know that both APC and PDP have serious crises within but you can see that APC have almost succeeded in managing theirs with the declaration of the president for a second term, now the APC is having a good head start, while PDP, which is supposed to be putting the heats on them are still not sure of anything, while Buhari’s men are working day and night within and outside the country,” said our source.

Another reason both Saraki and Kwankwaso are still in limbo, according to insiders, has to do with even the way and manner the new Chairman of the PDP, Uche Secondus emerged. According to them, he was actually part of the problems in the party and his emergence hasn’t changed anything in the structure of the party. Some of the allegations against him by the Economic and Financial Crimes Commission (EFCC) are weighty,

“About 55 vehicles (worth N310m) were bought for Secondus:

According to a source; “These are said to be gifts from an individual as if he was into car dealership. Also, the fears and observations of founding fathers like Chief Anthony Anenih and former governor Jim Nwobodo highlighted before the elections, which Allison Madueke and the cabal that held Jonathan hostage are still there, same wine in different bottles will not change the taste. Nigerians are wiser.”