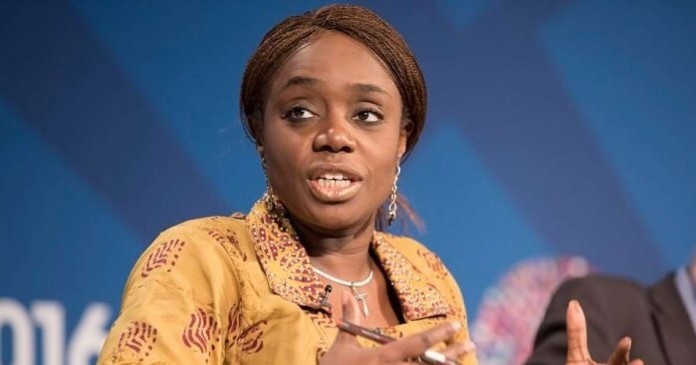 Emerging details making the round has revealed that the Finance Minister, Kemi Adeosun connived with the Nigerian Senate President, Bukola Saraki and the Speaker, Federal House of representatives, RT Hon. Yakubu Doagara and with the aid of the Accountant General have illegally received and shared ‘a hefty N10billion from the national treasury.

According to a report monitored on Premium Times NG, the allegedly shared public fund was not part of the obscene N125billion appropriated for the federal legislature in the 2017 fiscal year for recurrent and capital expenditures.

It is also not part of the N100billion allocated for the controversial zonal intervention projects through which lawmakers have always enriched themselves.

“It was arbitrarily and illegally approved for the lawmakers by the Minister of Finance, Kemi Adeosun, in collusion with the Accountant General of the Federation, Ahmed Idris.

The Premium Times NG reports further stated that the money was released to the lawmakers as part of a secret N50billion approved for the execution of the so-called “constituency projects” Mr. Saraki and other lawmakers discreetly inserted into the budgets of several ministries, agencies, and parastatals.

That is different from the controversial zonal intervention projects for which N70billion of the N100billion appropriated in the 2017 budget have so far been released to contractors handpicked by lawmakers.

Apart from the N10billion cash given to the National Assembly, another N485million was released for a project conceived by Mr. Saraki – construction of model junior secondary schools across Kwara Central Senatorial District.

Four hundred and fifty million naira (N450million) was approved for the project in the 2017 appropriation law. But an additional N35million cash was released for its execution, in clear breach of the law.

To take possession of the illegal N10billion cash given to them by Mrs. Adeosun, Messrs Saraki and Dogara submitted a list of 82 contractors which they claimed the National Assembly was owing and the amount due to each contractor. It was based on that single document that the cash management office at the finance ministry funelled the huge cash to the lawmakers.

Mrs Adeosun failed to do further due diligence such as asking the lawmakers to provide award of contract letters, Certificates of No Objection issued by the Bureau of Public Procurement and job completion certificates issued by the National Assembly.

Finance ministry insiders described the action as deceitful and illegal, saying since the National Assembly has its own budget, which is usually a first-line charge on the federal treasury, any other cash released to it is extra-budgetary and unlawful.

National Assembly sources described the released cash as slush funds for the leadership of the two chambers and top civil servants at the management unit. Our sources said the national assembly budget already provided for the projects and that there was no need for any extra-budgetary funding from the ministry of finance.

Investigations by Premium Times NG showed that at least 44 of the 82 contractors Messrs Saraki and Dogara claimed they were owing were not registered on the National Database of Contractors, a database of the Bureau of Public Procurement (BPP). That means they are not eligible to be awarded federal contracts. A further check by this newspaper revealed that 17 of the 44 firms were not even registered with the Corporate Affairs Commission (CAC).

Our National Assembly sources said the contractors were indeed awarded jobs but that some of them had already been paid while pending payments were already provided for in the federal legislature’s own budget.

When contacted for explanation, Mrs. Adeosun referred our enquiries to the Accountant-General, Mr. Idris. After three days , the accountant-general sent us a written response saying the controversial payment was sourced from a N20 billion service-wide vote “provided for local contractors’ liabilities under the 2017 Appropriation for all Ministries, Departments, and Agencies (MDAs) and institutions of Government.”

But while it is true that N20billion was appropriated for the payments of local contractors, experts say it was illegal to pay those hired by the National Assembly from the funds.

Questions were also raised regarding why Mrs. Adeosun would give half of the allocations made to pay local contractors to the National Assembly at a time those who built primary health centers and roads and supplied drugs to hospitals were yet to be paid.

One official at the finance ministry also challenged the minister to explain why the funds were first moved to the National Assembly instead of paying the contractors directly. “It is a monumental fraud that they are now desperate to cover up,” the official, who asked not to be named, said.

“The National Assembly already has its own budget of N125billion and it cannot therefore benefit from any other federal funds without appropriation,” said Auwal Rafsanjani, executive director of the advocacy group, ‎Civil Society Legislative Advocacy Centre (CISLAC).

“This is a serious financial recklessness orchestrated by the minister of finance and the National Assembly. Here, the Appropriation Law, the Fiscal Responsibility Act and the Public Procurement Act appear to have been broken.

“It is sad that the executive, in a desperate bid to make peace with the National Assembly is now conniving with unaccountable lawmakers to further shortchange Nigerians.

“Nigerians must stand up for their right and the minister of finance must be compelled to explain why she sacrificed integrity and financial prudence to engage in this kind of practice.”

Olanrewaju Suraj of the Civil Society Network Against Corruption believes the nation’s anti-corruption agency should be called in to thoroughly investigate the matter.

“It is a major blight in the anticorruption fight of the government and prudent management of resources by the Buhari government,” Mr. Suraj said.

“The National Assembly has its own budget that should cover capital and recurrent expenditures. So it cannot benefit from any other fund without appropriation.

“Besides, every payment for capital expenditure is not at the whims and caprices of the finance minister. There is always a procurement process that must be certified by the BPP.

“The anti-corruption agency must be invited to investigate the motive, the process and the purpose of the released fund.”

Mum is the word from Saraki, Dogara

Messrs Saraki and Dogara declined to comment for this story. Their spokespersons, Yusuph Olaniyonu and Turaki Hassan, directed all enquiries on the matter to the Clerk of the National Assembly, Mohammed Sani-Omolori.

But Mr. Sani-Omolori did not answer multiple calls made to him by this reporter on Wednesday. He also failed to answer a text message sent to him.