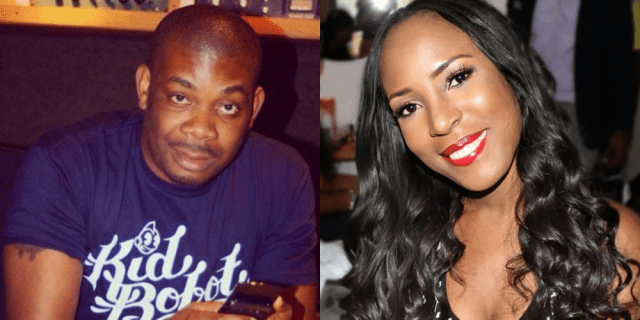 Recall that Ikeji’s engagement to her one-time ex-boyfriend was announced in March by her sisters.

However, following speculations that Don Jazzy was the father of the baby, after the news of the pregnancy broke, he went on his twitter handle @donjazzy to refute the claim.

He wrote, “It wasn’t me”; to which fans sympathised with him for not getting his crush to marry him.

And @Lindarome20 responded and tweeted, “Lol bro, take heart; we your loyal fans are patiently waiting for your own wedding, and right in the reception, I will throw *my dear*shaku shaku nice song don babaJ.”

@Adebayorh1 wrote, “So @DONJAZZY, on top those crushing on @lindaikeji, you weren’t the one..mr man, are you kidding me right now?”

NAN reports that after the announcement of Ikeji’s engagement in March, Don jazzy shared a picture of himself being consoled by friends with the caption: (crying emojis) Kai Linda is engaged. It is finished. ”

Before the news, Don Jazzy had made several moves and also ‘proposed’ to her (Linda) on social media and with various posts on his Instagram handle.

One of such was a recent photo of Linda with the caption: “When you re fine you re fine abeg.”