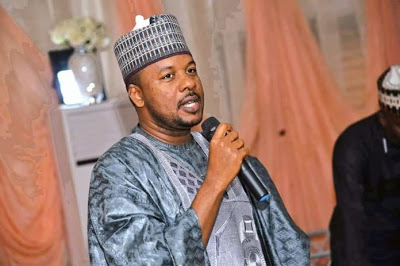 “Not a single day goes by without some sort of insecurity in this land. This is a shame! Deal with terrorists decisively or resign.”

Emerging details have indicated that the spokesperson of Governor Abdullahi Ganduje of Kano State, Salihu Tanko-Yakasai, has been reportedly arrested by operatives of the Department of State Services (DSS) after he called the All Progressives Congress (APC) a failure asking the government led by the party to resign.

Tanko-Yakasai had on Friday expressed frustration following the news of the abduction of 317 schoolgirls from a secondary school in Jangebe, Zamfara state.

“Clearly, we as [the] APC government, at all levels, have failed Nigerians in the number 1 duty we were elected to do which is to secure lives & properties. Not a single day goes by without some sort of insecurity in this land. This is a shame! Deal with terrorists decisively or resign,” he had tweeted.

News further spread that some hours later, the whereabouts of Tanko-Yakasai was unknown.

However, an official of the Kano state government on Saturday revealed in a tweet post that Tanko-Yakasai is with the secret police.

“Alhamdulillahi we just confirmed @dawisu is at DSS office,” the official tweeted.

This is not the first time Tanko-Yakasai has criticised the President Muhammadu Buhari-led administration.

He was suspended last year by Governor Ganduje for criticizing Buhari

At the height of the demonstrations against police brutality in October, Ganduje’s aide asked the president to address the country over calls to disband the Special Anti-Robbery Squad (SARS) at the time.

“To speak to ur own ppl over issues that are bedevilling them has become something like a favour u’re doing to them. Over & over again, u cannot spare 5mins & address the nation to calm them down, the same people u went to the 36 states to beg for their votes, its heartbreaking,” Tanko-Yakasai wrote on Twitter.