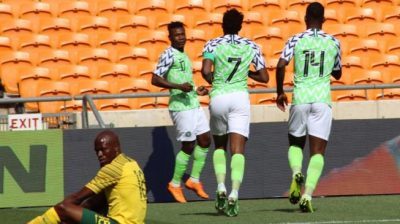 The Super Eagles of Nigeria picked their ticket for the 2019 Africa Cup of Nations after a 1-1 draw in the match against their South African counterparts on Saturday despite officials’ questionable calls.

Two lawful goals by Nigeria were ruled off-side by the referee in questionable circumstance.

The Nigerian side booked their place in the next year’s African soccer show piece after playing 1-1 draw in the match against South Africa’s Bafana Bafana.

Nigeria will be appearing at the African showpiece after missing out in the last two editions of the tourney.

Libya also in the same group with Nigeria and South Africa put eight goals past Seychelles to keep alive hopes of also featuring at the finals.

The Libyans just missed equalling the record away winning margin for a Cup of Nations qualifier held by Ghana, who won 9-1 in Niger 49 years ago.

A win for Libya at home in their final game against South Africa will see them through to the 2019 AFCON finals.

A total of eight nations have secured places at the 24-team finals with hosts Cameroon, Madagascar, Senegal, Egypt and Tunisia securing places before this weekend.

Nigeria, the three-time former champions who had failed to qualify for the last two editions, were ahead in South Africa within nine minutes when Buhle Mkhwanazi conceded an own-goal.

Outstanding South African Percy Tau set up the equaliser for Lebo Mothiba on 26 minutes, but the hosts were fortunate as several contentious offside decisions went against Nigeria.

Anis Saltou bagged a hat-trick in Victoria as Libya humiliated the Seychelles, whose 188th world ranking is the lowest among the 48 teams in the qualifying competition.

A Patrick Kaddu goal on 79 minutes not only assured Uganda of first place in Group K, it also opened the door for Tanzania to also qualify.