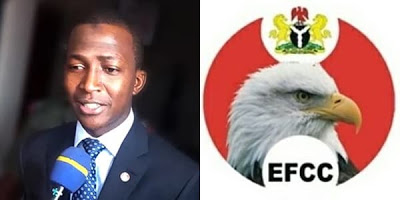 Chairman of the Economic and Financial Crimes Commission (EFCC), Abdulrasheed Bawa, on Wednesday appeared before a Federal High Court in Lagos to give testimony in a ”N1.4 billion oil subsidy fraud” trial involving Abubakar Ali Peters and his oil company, Nadabo Energy Limited.

Peters and his company were arraigned on December 10, 2012 for offences bordering on obtaining money by false pretences, forgery and use of forged documents.

The two defendants were accused of obtaining the aforementioned sum from the federal government by falsely claiming that it represented the subsidy accrued to them.

Peters and his company, Nadabo Energy, pleaded “not guilty” to the charges preferred against them by the EFCC.

The EFCC chief, during the hearing, said the defendants took six million litres of premium motor spirit (PMS) from the mother vessel to a chartered vessel and inflated the quantity of the product.

Bawa said there are email correspondences to show that the company engaged in fraudulent activities.

“The email also informed us that one Mr Jide Akpan was the agent of the vessel,” Bawa said after he was led in evidence by Saidu Ateh, prosecution counsel.

“We invited the said Akpan and during the course of our interrogation with him he confirmed that the first defendant through the second defendant deferred the vessel and paid for it.”