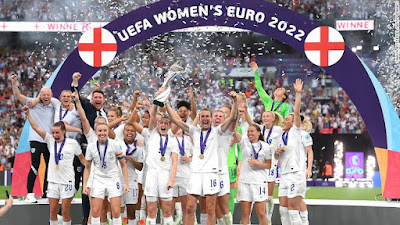 A record crowd of 87,192 for a European Championship final — men’s or women’s — watched as Chloe Kelly’s first international goal fired the Lionesses to victory over the eight-time winner.

After three defeats at the final hurdle, goals from Kelly and Ella Toone canceled out Lina Magull’s equalizer and sealed the dream ending to a stunning tournament run. A swashbuckling road to the final included a Euro-record 22 goals scored and just two conceded, an 8-0 demolition of world No. 11 Norway and a 4-0 dismantling of the world’s second-highest ranked team Sweden.

And despite only beating Germany twice in their previous 27 meetings, Wiegman’s players battled to a hard-fought victory to extend the Dutch coach’s impressive streak and spark scenes of pure, unbridled joy at the home of English football.

That euphoria was encapsulated by the celebrations of the matchwinner, who offered up one of the great post-match interviews when she spoke to the BBC. Bouncing around, shouting and dancing, Kelly serenaded viewers with England’s adopted anthem, Neil Diamond’s classic “Sweet Caroline,” before running off with the microphone.