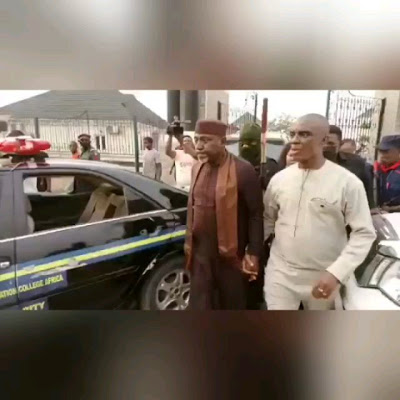 A former governor of Imo State, Rochas Okorocha, has been arrested for reopening the Royal Spring Palm Hotels and Apartments seized by the state government

The Imo state government had sealed the property which is situated along Akachi road, Owerri, the state capital.

The commissioner for lands, Enyinnaya Onuegbu, had on Friday led a team of government officials and police officers to seal off the facility.

Okorocha, in reaction to the closure of the hotel, had led his entourage to unseal the property on Sunday..

The former governor personally drove away a pick-up truck that was used to block the entrance of the gate and subsequently, he marched into the premises with his entourage in tow.

Not long after forcefully gaining access into the property, masked police operatives arrived to escort him away.

Hope Uzodinma, Imo governor, and Okorocha have not seen eye-to-eye since the latter emerged as his successor.

Last week, the Uzodinma administration recovered and renamed the Eastern Palm University which was founded by Okorocha.