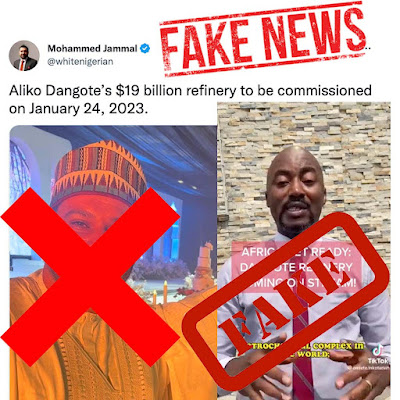 Reacting to the false information, the company described the well-circulated posts as fake while insisting no date has been announced.

The post, after it was shared by Mohammed Jammal, @whitenigerian, on Friday, went viral and subsequently attracted comments from several users.

What you should know about Dangote Dangote Refinery

Dangote Petroleum Refinery, with 650,000 barrels per-day installed capacity is expected to double the total output of Nigeria’s existing ailing refining infrastructure and meet 100 per cent of the Nigerian requirement of all refined products will pump out fuel any moment soon, the Agency declared.

The successful completion of Africa’s biggest petroleum refinery and the world’s largest single-train facility is expected to have a significant impact on Nigeria’s foreign exchange through import substitution and substantial savings in earnings. It is expected, that once the refinery commences production, the pressure on the nation’s currency will reduce and significant inflow of forex, is expected to come in through sales from the refinery.

It is estimated that Nigeria will import zero petroleum oil products – down from approximately $50 billion current oil product imports per year once the refinery kicke-off its operation.

Dangote Oil Refinery is a 650,000 barrels per day integrated refinery project under construction in the Lekki Free Trade Zone, Lagos. It is expected to be Africa’s biggest oil refinery and the world’s biggest single-train facility.