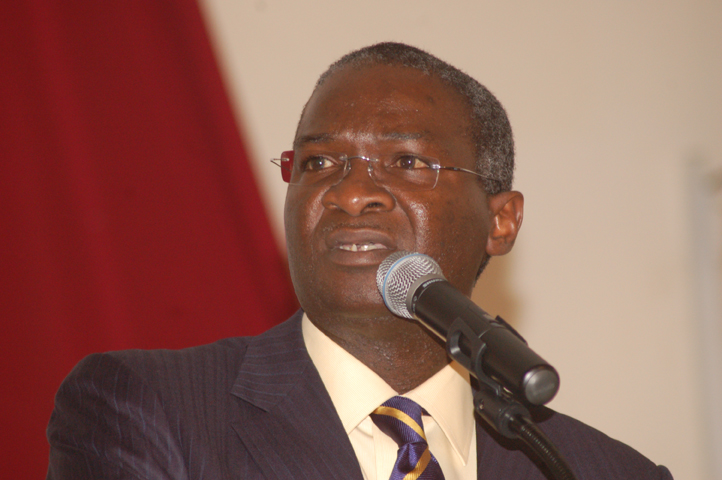 Mr. Babatunde Fashola, the Minister of Power, Works and Housing, is irked by vandalism and deterioration of infrastructure in Lagos state and called for a complete regeneration.

Fashola, who inspected roads and other infrastructure in Apapa, on Saturday, said the facilities in the area were supposed to boost the nation’s economy.

He also inspected the National Stadium, Surulere, through Alaka to roads in Apapa and the Apongbon bridge to the outer Marina.

At Alaka flyover bridge, the minister instructed the team of engineers, led by the Director, Federal Highways, South-West, Mr Emmanuel Adeoye, to expedite action on the replacement of vandalised manhole covers.

He emphasised the need to restore Liverpool Road and the bridge, in order not to shut down the country.

Fashola urged the engineers to reconstruct some drains and blocked drainage channels connecting a major canal in front of the National Theatre, Iganmu, to solve flood problem causing persistent road degeneration in the area.

“Why did you have wait this long to allow this level of degeneration? If you have to do the drainage and construct some box culverts to keep the drainage flowing, please do it.

“If we lose Liverpool Road (road leading to the Tin Can Island Port and the Nigeria Ports Authority) and this place (Funsho Williams Road), we would have shut down the nation,’’ he said.

He appealed to Reynolds Construction Company (RCC), the firm handling the rehabilitation of Funsho Williams Road to the Ijora Bridge, to speed up construction.

Fashola said that the entire stretch of the road was sitting on swampy land and stressed the need to finish the construction before another rainfall.

He also instructed the contractor to replace vandalised bridge railings on the axis with concrete.
Fashola directed the team of engineers to liaise with the relevant authorities to relocate the popular Costain Bus Stop on Funsho Williams Avenue, to check gridlock and persistent road degeneration.

“This Costain Roundabout is not a bus stop, but the layby ahead,’’ he said.

While inspecting the street lights under and above the Ijora and Funsho Williams Avenue bridges, the Minister directed his engineers to liaise with Rural Electrification, to replace all the lights.

“If there are new solar technologies, adopt them. It is a total regeneration of this Apapa area,’’ he said.

While inspecting the Apapa Wharf Road Reconstruction Project, he said that President Muhammadu Buhari was happy with the financiers of the project;
AG Dangote Construction Company; Flour Mills of Nigeria Ltd and the Nigerian Ports Authority.

Mr Vaknin Harel, the Project Manager of the company, had earlier explained that RCC was filling several potholes caused by flooding, as well as filling the road with more durable materials to make the road last longer.

“The culverts are blocked from beginning to end, we need to fix new culverts,’’ Harel said.

Mrs Korede Keisha, Federal Ministry of Power, Works and Housing Engineer supervising the project, explained that the project was slowed down by the inability to relocate some gas pipes which were too expensive to move.

“We decided to shift the road about one metre from the gas pipe, since the contractor, AG Dangote, cannot excavate for drains, he is escavating for the roads,’’ Keisha said.  NAN