Former governor Ayo Fayose of Ekiti state on Tuesday afternoon arrived at the Abuja office of the Economic and Financial Crimes Commission (EFCC).

Fayose who had earlier notified the EFCC that he will make himself available immediately his tenure expires stormed the EFCC office wearing a black t-shirt with the inscription “EFCC, I’m here.”

He was accompanied to the anti-graft agency’s office by Nyesom Wike, governor of Rivers state, and a former minister of aviation, Femi Fani-Kayode.

Fayose said: “I am here in line with my promise that I will be here on the 16th of October, and like I said to EFCC, they should await my arrival.

“This morning, they have been to my house which I think it’s unnecessary.”

Rivers state governor, Wike also said that Fayose had written EFCC that he will submit himself on the 16th of October.

“He wrote to the EFCC that he will submit himself on the 16th of October.

“So let Nigerians know that he came by himself to EFCC without anybody harassing him, so that’s why I brought him here,” Wike said.

Fayose was spotted at anti-graft agency office with a bag filled with his clothes.

Recall that the EFCC had hinted a day after the July 14 Ekiti governorship election that it would investigate the integrated poultry project of Fayose’s administration.

The agency was said to be planning a re-dig of a N1.3bn fraud case levelled against Fayose in 2005.

The case subsequently led to his impeachment from office in 2006. 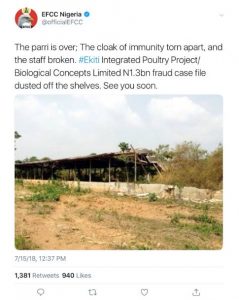 In a tweet on its official handle which was swiftly deleted, the EFCC wrote “The parri is over; The cloak of immunity torn apart, and the staff broken. #Ekiti Integrated Poultry Project/Biological Concepts Limited N1.3bn fraud case file dusted off the shelves. See you soon.”