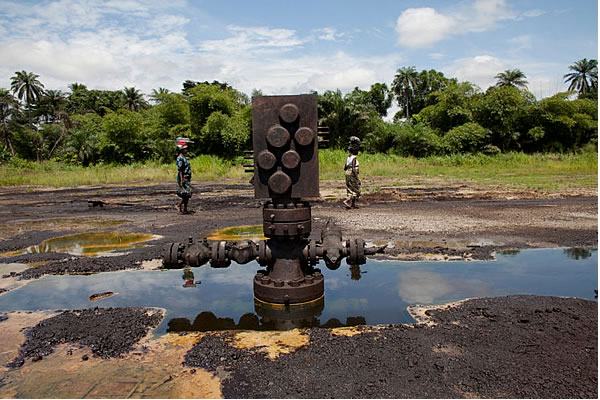 With barely a month to the 2003 presidential election in Nigeria, Funsho Kupolokun, the Special Assistant to then President Olusegun Obasanjo hurriedly put together a bid round for three oil blocks – OPLs 223, 251, and 257, Premium Times NG reports.

OPL 223 was not awarded to any company.

A House of Representatives committee which investigated those allocations five years later described the bid as “curious” because it was done three years after the introduction of the principle of open, competitive bidding. Also, none of the blocks was listed as being on offer in a report of the Committee on the Evaluation of Bids for the Year 2000 Licensing Rounds.

Part of the reasons for the flouting of due process in the allocation which led to the country losing billions was poor oversight of the process from the petroleum minister at the time – President Obasanjo.

After Mr. Kupolokun’s allocation in 2003, the Bid Evaluation Committee discovered that both Vintage Oil and Gas Ltd and ECL International Ltd not only had “doubtful experience, technical ability and track records;” they were also unknown to the Nigerian oil and gas industry.

In a 2008 report by a House of Representatives committee on Due Process of Allocation of Oil Blocks by the Department of Petroleum Resources (DPR) obtained by PREMIUM TIMES, the lawmakers found no evidence that the 2003 bid round got a ministerial approval from the petroleum minister, Mr. Obasanjo.

In addition, a series of sharp practices dogged the payment of signature bonuses on the oil blocks. For instance, Vintage Oil and Gas paid a mere $2.5 million in signature bonus while Elf Petroleum Nigeria Limited made a staggered payment of $15 million as against the assessed $20 million.

“The circumstances in which Elf Petroleum Limited that had not been awarded OPL 223 on March 12, 2003, came to be awarded the same block six weeks later on April 29, 2003, is suspicious,” the committee report stated.

“It is all the more suspicious when this later award is juxtaposed against the fact that its partner on the block is NPDC, a subsidiary of NNPC (Nigerian National Petroleum Corporation).”

The committee recommended that since the award of OPL 223 could not be revoked due to the involvement of the NPDC, the balance of $5 million be immediately recovered from Elf Petroleum Nigeria Limited.

It also condemned the role played by Mr. Kupolokun and called for his reprimand for “arrogating to himself the discretionary powers of the minister.”

“Engineer Funsho Kupolokun’s role in the subterranean award of OPL 223 should be thoroughly investigated to establish if any malfeasance borne out of interest influenced the circumstances of this award and prosecuted if such malfeasance is established.”

In December 2003, Mr. Kupolokun, who became Special Assistant to the President in 1999, was appointed Group Managing Director of the NNPC.

To directly oversee the operations of the petroleum ministry, Mr. Obasanjo, a retired army general, appointed himself the petroleum minister, to be assisted by the late Rilwanu Lukman and Mr. Kupolokun as Presidential Adviser on Petroleum and Special Assistant to the President respectively.

Following Nigeria’s return to civilian government in 1999, the first licensing round was held one year later. Mr. Obasanjo opted to abandon the long-standing discretionary approach used by the military rulers – where oil blocks were given out to associates, friends and cronies without due process and at give-away prices – and replace it with a more transparent system.

In the past, beneficiaries of the blocks turn around and hawk them to international oil companies at huge profits.

There were 33 blocks on offer in the Year 2000 bid round: 22 offshore, half of them located in deep waters; seven in shallow waters; and four onshore.

The Bid Committee, ranking companies in accordance with the criteria contained in the guidelines for the allocation of the blocks (the best company ranked first and the least ranked last), submitted its Evaluation Report to the Mr. Lukman. Mr. Lukman was abroad, and so Mr. Kupolokun acted upon the evaluation.

In the end, only eight blocks were taken up.

The final result saw some of the companies ranked first in the bid committee’s evaluation report losing out in the allocations. For instance, Obekpa Petroleum Limited which was the preferred bidder for OPL 242 lost the block to Ocean Energy Limited and Nigerian Petroleum Development Company. Also, the concept of ‘forced marriages’ was introduced into the award process leading to companies being paired to co-own oil blocks. The Nigerian Agip Exploration and NPDC were awarded OPL 244 although Statoil Nigeria Limited emerged the preferred bidder. Another block, OPL 322 in which Shell Nigeria Exploration & Production Company emerged the preferred bidder was awarded to the company and Dajo Oil.

All the 10 recommended awardees by the Evaluation Committee for 10 oil blocks in the 2000 bid round were no longer in possession of the blocks by 2007.

Although Peter Achebe, then acting Director of DPR, and Mr. Kupolokun testified before the House committee that there were no complaints on the ‘forced marriages,’ Obekpa Petroleum Limited petitioned the committee over how it was edged out from OPL 242 by a consortium led by Ocean Energy Limited that did not participate in the 2000 bid round.

Igo Aguma, chairman of the House committee, said only $5 million, out of a possible $248 million, was remitted to the Nigerian government as signature bonus during the 2000 bid round.

The House committee noted that based on the preponderance of evidence before it, there was no way the bid committee could determine that every instruction received from both presidential aides – Messrs Lukman and Kupolokun – had ministerial approval.

“In effect, it was not clear if these two political office holders were acting by the authority of the minister as provided in the Petroleum Act or on their own.

“There was also no means of confirmation as access to the president who was also the Minister of Petroleum Resources was severely restricted.”

The wrongs of the 2000 bid round were taken into consideration at the next major licensing round in 2005 and led to the introduction of new elements. It was Nigeria’s first ever open auction as bids were projected simultaneously onto an electronic screen for everyone to view.

A total of 77 blocks were on offer, as against 61 blocks directed by the Presidential Adviser on Petroleum and Energy, Edmund Daukoru. Mr. Daukoru gave the directive dated March 5, 2005 in an internal memorandum sent to the DPR, the Permanent Secretary at the Petroleum Ministry, and NNPC.

Forty-four of the blocks were finally awarded.