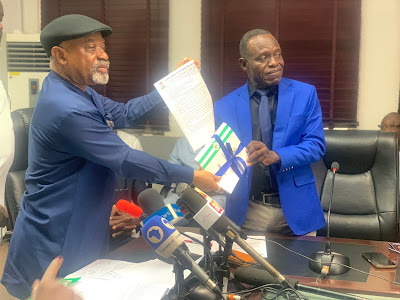 The Federal Government on Tuesday formally recognised and presented certificates of registration to the two breakaway factions of the Academic Staff Union of Universities (ASUU).

The two factions are the Congress of Nigerian University Academics (CONUA) and the National Association of Medical and Dental Academics (NAMDA).

The Minister of Labour and Employment, Dr Chris Ngige did the presentation, in an apparent move to break the resolve of the striking union.

The labour minister explained that the two bodies will exist alongside ASUU.

ASUU has been on strike since February 14, 2022, as lecturers of public universities protest unpaid allowances and demand better welfare packages from the Federal Government.

Efforts to resolve the issue between the union and the Nigerian government have severally hit the rock.

The federal government had earlier announced that it will formally recognise the two breakaway factions of the striking ASUU.

CONUA, one of the breakaway factions, also disclosed that it commenced its registration process in 2018 but the government said it was reluctant to approve the registration because it did not want to create a problem.

The union, led by ‘Niyi Sunmonu, a lecturer at Obafemi Awolowo University (OAU), has constantly dissociated itself from any strike declared by ASUU, according to Premium Times.