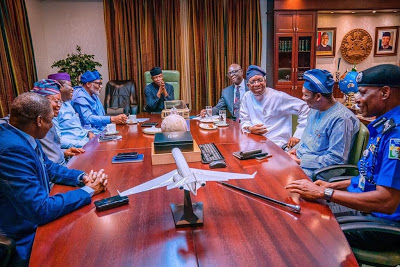 The federal government of Nigeria and the six governors of the six states from the South West Region of the country on Thursday agreed on how Amotekun, a new security outfit set up in the region, should proceed.

Vice President Yemi Osinbajo disclosed this after meeting with the six South-west governors, alongside Attorney-General Abubakar Malami and the Inspector General of Police, Mohammed Abubakar in Abuja, the federal capital.

His spokesperson, Laolu Akande, said the meeting was at the instance of the governors who had asked to see President Muhammadu Buhari over the controversy surrounding the Amotekun initiative. Due to the president’s absence, he asked the vice president to host the meeting.

“The meeting was very fruitful and unanimous resolutions were made on the way forward,” Akande said in a statement. “Having regard to the need for all hands to be on deck in addressing the security concerns across the country, it was agreed that the structure of Amotekun should also align with the Community Policing strategy of the Federal Government.

“It was also agreed that necessary legal instruments will be put in place by each of the States to give legal backing to the initiative and address all issues concerning the regulation of the security structure.”

Governor Rotimi Akeredolu of Ondo State, who also spoke to journalists after the meeting, corroborated the vice president’s statement.

“What I believe is our resolution is that Amotekun is there, you know the federal government is starting community policing, in essence really is about community. So, we are going to work together to see the community policing and Amotekun work in a way,” he said.

The creation of the security network to check rampant attacks and kidnapping in the region triggered controversy, with many Nigerians backing the effort while the federal government initially said it was unconstitutional.

Thursday’s meeting means both sides have agreed to pull back from confrontation and work together under the federal government’s community policing initiative.

Read Mr Akeredolu’s remarks after the meeting on Thursday:

Well we had a very fruitful discussion. Governors of south west as you know we were all there.

The meeting was presided over by the Vice President. The Honourable Attorney General of the Federation was there as well as the Inspector General of Police.

So, we have robbed minds and all of us have agreed on the way forward. The most important one is that we are going to have legal framework to back this Amotekun. And this legal framework is going to be one which we all are going to look at and will be sure to go without any hinderance.

Does it mean the establishment of this outfit has been put on hold until the legal framework is developed?

No. What I believe is our resolution is that Amotekun is there, you know the federal government is starting community policing, in essence really is about community. So, we are going to work together to see the community policing and Amotekan work in a way.

Why was there no such consultations before the launch of the outfit?

On what he will tell those protesting that government is trying to stop it?

No, the government is not trying to stop it. The attorney general has spoken on that, I’m sure you have all read the statement that he was misinterpreted. So it’s so clear, there was no time that government wanted to stop Amotekun and the AGF having spoken, it’s all about us, so there is no problem.