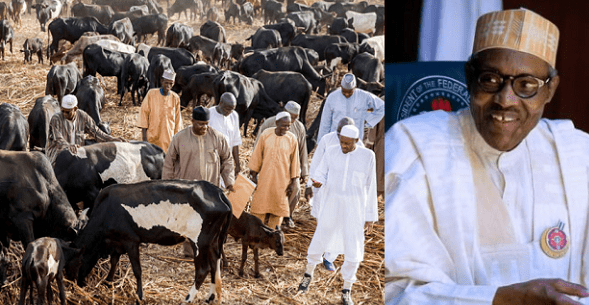 Newsheadline247 understands there had been claims that the initiative was part of the plans by the Federal Government to seize land in states and give to Fulani herders, a development that was emphatically refuted by the Federal Ministry of Agriculture and Rural Development on Sunday.

The Federal Government stated that the programme in its first three years will gulp up to N70 billion and it will be available for individuals who are interested in grazing cattle in any of the facilities in 10 states where the pilot scheme will kick off.

The 10 states are in the first phase of the national ranching project, which was disclosed at the unveiling of the National Economic Council’s National Livestock Transformation Plan as part of efforts to end clashes between farmers and herdsmen.

Dr. Andrew Kwasari, the Secretary of the NEC Sub-Committee announced that the Federal Government and states would spend N179bn over a period of 10 years on the national livestock implementation.

In reaction to claims that the Federal Government was attempting to seize land through the scheme, the Director of Information, FMARD, Tolu Makinde said no land would be given directly to any individual.

“Now, this does not mean that the land will be given directly to individual herders. The way it is being conceived is that a facility will be provided in the states and whoever needed to graze will take them there. People need to understand that it (the land) is not going to any individual, whether Fulani or not. If you are a herder, you can take your herds there to graze and pay whatever token is necessary.”

Fulani herdsmen and farmers have been in gory battles over grazing for decades.