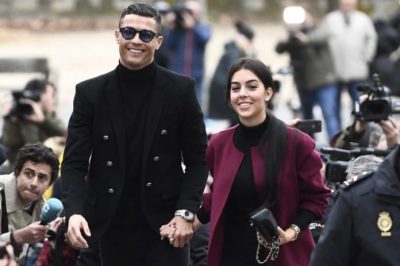 The charges relate to his time at former club Real Madrid.

Juventus winger Ronaldo arrived at the Madrid court hand in hand with Georgina Rodriguez and dressed in an all-black outfit finished off neatly with white trainers and shades and gave a thumbs up and grin to the assembled reporters outside.

A judge had earlier rejected his request to enter the building via car to avoid paparazzi, meaning a media scrum greeted the 33-year-old, who found time to sign a sneaky autograph on his way up to the steps to court.

Ronaldo arrived Madrid hours after Juventus’ 3-0 Serie A win over Chievo, where he missed a penalty.

He was highly expected to plead guilty to defrauding the Spanish treasury and sign a deal on the sentence and fine.

Due to the non-violent nature of Ronaldo’s crime, and Spanish law dictating that a term of under two years incarceration can be served on probation for first-time offenders,the 5-time Ballon d’Or winner will not spend any time behind bars.

Ronaldo’s court appearance in the Spanish capital lasted just 15 minutes as the player needed simply to sign off paperwork for the previously agreed settlement in court, Reuters reported.

Earlier, Ronaldo’s former Real Madrid team-mate Xabi Alonso walked in to face own tax fraud case with his hands deep in his suit pockets. “Yes, all good,” was his only response to reporters’ questions.

Former Manchester United and Sporting Lisbon winger Ronaldo has reportedly already paid a tax office penalty in the sum of €13.5 million, after accepting charges he defrauded the court to the tune of €14.7 million.