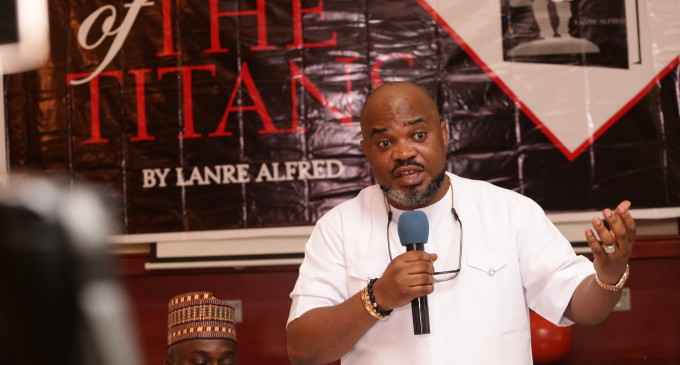 The book which is the fifth of Alfred’s publishing endeavours, chronicles the exploits and attainments of Nigeria’s finest brains and leaders in different fields of endeavor. The Lagos State Commissioner for Information, Steve Ayorinde, graced the public presentation of the book in Lagos, on behalf of the state government, a major supporter of the author’s factual initiative. Ayorinde commended the writer’s depth and the painstaking research that heralded the factual and inspiring narrative. Other dignitaries at the presentation enthused about the finesse and brilliant craft of the author.

The book, stressed Alfred, details the matchless and valuable contributions to the socio-economic development of Nigeria by individuals who have turned an idea into an industry and attained in the process, remarkable prosperity and renown. “It is about the wunderkinds from the slums of Ajegunle, Bariga and Surulere, Agege, Amokoko, Ijora, among other places that have parlayed their creativity into a flourishing enterprise and are not only financially liberated but are accorded global respect,” he said.

The literature is dedicated to Capt. Idahosa Okunbo for profound reasons: chief among them is the rarity of his persona, according to the author. Alfred stressed that the Chairman of Ocean Marine Solutions flaunts the same fundamental psychology as the artist, inventor, or statesman.
He has set himself at a certain work and the work absorbs and becomes him. It is the expression of his personality; he lives in its growth and perfection according to his plans.

According to him, Capt. Okunbo became worthy of the honour by account of his sterling industry, humanity and unpretentious modesty manifests positively on all of his acquaintances, the author inclusive. Capt. Okunbo is a patriot whose commitment to national and economic stability are beyond doubt. He is currently one of the very few economic giants and magnates enjoying the respect of the Nigerian government due to his infectious modesty and enviable business culture in the oil and gas sector. He would be 60 in January. At 60, Capt. Okunbo has conquered Air, Sea and Land. There is no gainsaying that he has conquered the air as a pilot; the sea as an oil and gas player with over 60 vessels; and now, land as he recently unveiled an agricultural project worth a staggering $750 million with an initial $300 million take-off capital.
Alfred’s new book is widely commended as a product of meticulous research spanning the last decade.

“The book mirrors the outstanding resilience and perseverance of outstanding Nigerians in their ambitious dash for honour and progress and in the face of daunting political and socio-economic odds, he said.
Some of the chapters in the book include: ‘The Forbears, Their Imperial Majesties, Like Burnished Stones, Thrill Merchants, Gods of Industry among others.

“Essentially, I have documented in pristine prose and pictures, the inspiring exploits and attainments of Nigeria’s finest breed of magnates, politicians, scientists, academics, technocrats and entertainers who are transforming the world and inspiring others to do likewise,” said Alfred.
Thus, as he recalls his subjects’ storied trajectory and records it for posterity and historians, Alfred projects his book as an inspirational mini-biography of the exploits of Nigeria’s finest.

In commemoration of Lagos’ golden jubilee, Alfred noted that, “A section of the book has been devoted to the contributions and achievements of some Lagosians whose industry and initiatives have contributed to making Lagos the fifth largest economy in Africa and a primus inter pares in Nigeria. Their contributions to the growth of Lagos would be put into proper historical perspectives for the benefit of posterity and researchers.”

With a Foreword written by Encomium Magazine publisher, Kunle Bakare, the coffee table book has hit bookshelves across the country. According to Kunle Bakare, “This assemblage of profiles of our most colourful characters not only signposts our past but defines our future. The heart-warming narratives of those who toiled and laboured and sacrificed, who risked lives and limbs to ensure our today and tomorrow are far better than our yesterday are masterfully catalogued.

This documentation of giants who struggled to make life more meaningful, worthwhile and enjoyable for posterity positions Alfred as a chronicler to applaud for his audacious compilation.

Painstaking and methodical with a good grasp of an engaging lexicon of the flowery kind, he tells the stories of the giants who provide shoulders to perch on so that we can see far convincingly.
For a young man with a punishing schedule and deadlines to beat every week, Alfred’s effort brings to fore what seriousness can accomplish. What determination and diligence bring to bear. And l have never doubted his passion for writing, for beautiful and lyrical prose”.

Alfred, is the publisher of the popular coffee table book, ‘Highlife – Amazing Lifestyles of Nigeria’s Rich and Famous’ and biographies including ‘Pacemaker – Triumphs of Igho Sanomi at 40’, ‘The Lion of Afia Nsit – Triumphs of Scott Tommey at 45’; and ‘Julius Rone…The Jewel of the Delta’.