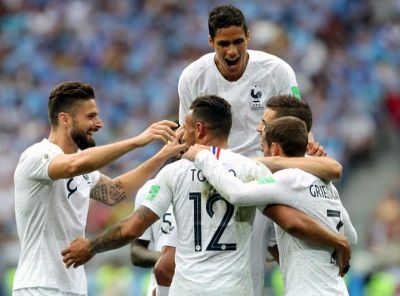 France are into the semi-finals of the World Cup for the first time since 2006 after seeing off Uruguay.

Raphael Varane and Antoine Griezmann scored as Les Bleus advanced to either meet Belgium or Brazil in the semi-finals.

Varane headed France into a first-half lead from a free-kick that came straight off the training field, with Antoine Griezmann checking his run before delivering the perfect cross for the Real Madrid defender to glance home.

The second half started with France continuing to control possession, but they were gifted the goal that made certain of their victory.

There seemed little danger when Griezmann let fly from the edge of the area but Muslera misjudged the flight of the ball, flapped at the shot, and saw it loop slowly over the line.