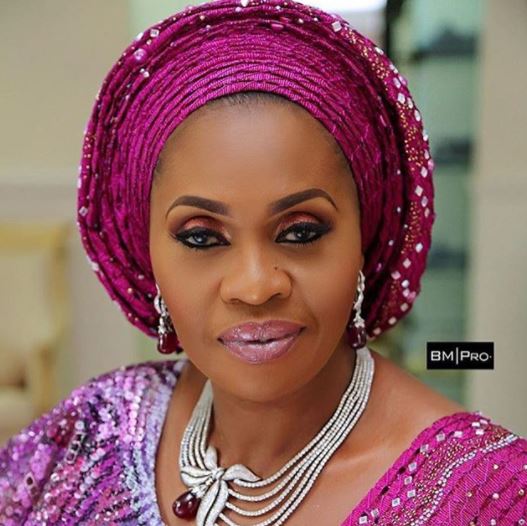 Mrs Shagaya is a Nigerian businesswoman and fashion enthusiast. She is believed to be one of the richest women in Africa. She is also the ex-wife of the father of Seun Bakare, who wedded the daughter of the Vice President, Yemi Osinbajo, early this year.

Judge, Oluremi Oguntoyinbo, in a judgment on Thursday, threw out Mrs Shagaya’s application, declaring that it lacked merit and that the said account was validly secured by the EFCC.

Mrs Oguntoyinbo faulted Mrs Shagaya’s claims that she was not availed the opportunity to defend herself before the order was secured.

According to the judge, the order was made through an ex-parte motion (without notice to other parties) and as such, there was no way the court would have listened to her own side of the story.

“Even when the other party is around, it can only be seen and not heard; therefore, the failure of Justice Hassan to hear the applicant cannot invalidate the order.

“The granting of the interim order of attachment is not unconstitutional and does not constitute an infringement on the applicant’s rights to own property,” the court held.

The court further noted that the failure of the applicant to controvert an averment contained in the counter-affidavit of the EFCC regarding her refusal to honour its invitation was fatal to her case.

The judge said the claim by the applicant that the order was made in perpetuity had no bearing as there was no evidence that the EFCC has either concluded its investigation of the matter or filed any charge against the applicant.

The court, therefore, held that it was erroneous to claim that the interim order had become permanent or in perpetuity, since the said order is meant to last until the conclusion of investigations by the EFCC.

She held that there was no evidence to show that the respondent had concluded its investigations, and accordingly dismissed the applicant’s suit.

Justice Muslim Hassan of the same court had on December 29, 2016, issued an interim order, attaching the account, following an ex-parte application by the EFCC.

Mr Hassan had held that the order would subsist, pending conclusion of investigations by the commission.

Dissatisfied, Mrs Shagaya, through her lawyer, filed a motion before another judge, Oguntoyinbo, seeking to unfreeze the account.

She claimed that the EFCC’s action violates her rights to own property, adding that she was never afforded an opportunity before the order was made.

NAN reports that in its counter affidavit, the anti-graft agency claimed that the N1.9 billion represents the balance of a total of N3.3 billion, which Mrs Shagaya received as “founder fees” on behalf of an organisation named “Women for Change”.

According to the commission, the organisation is spearheaded by a former First Lady, Patience Jonathan.

The EFCC claimed that the N3.3 billion was realised from Mrs Shagaya’s “alleged fraudulent activities in the Nigerian National Petroleum Corporation, (NNPC), where she allegedly influenced an allocation of Dual Purpose Kerosene to a company, Index Petrolube Africa Ltd., with the aid of the former First Lady.

EFCC claimed that out of the N3.3billion, Mrs Shagaya had “paid a cumulative sum of N1.2 billion to the former First Lady, through her account, ‘Women for Change Initiative’, to which she (Patience) is sole signatory.

The commission said that after paying N1.2billion to Mrs Jonathan, Mrs Shagaya warehoused the balance of N1.9 billion in her account.

The EFCC said it was on this basis that it secured an interim order to attach the said account.