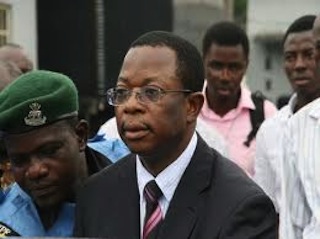 A former Managing Director of the defunct Intercontinental Bank Plc, Erastus Akingola has been ordered to return to the Federal High Court, Lagos, to stand and answer his alleged five billion Naira fraud charge.

The Supreme Court gave the order on Friday and had ordered the case be remitted to the Federal High Court, Lagos, for expeditious trial and to be handled by another judge.

Justice Tanko Muhammad, leading a five-man panel, affirmed the Feb. 20, 2015 judgment of the Court of Appeal in Lagos which overturned the Federal High Court’s decision striking out the charges against Akingbola.

He ordered that the case file be remitted to the Federal High Court, Lagos, for expeditious trial and to be handled by another judge.

Justice Kumai Akaahs, a member of the panel, in addition to agreeing with the lead judgment, said that he was worried by the stand of the trial judge in the matter.

Akaahs said that Justice Archibong acted like a military dictator when he descended into the arena and chided the prosecution for their inability to prosecute and therefore removed his toga of impartiality.

“He constituted himself into a military dictator and this is regarded as judicial tyranny and a case of bias was established against the judge.”

According to Akaahs, while we have immunity, we do not have absolute powers to do and undo.

It will be recalled that Akingbola ‘s trial was prematurely terminated in April 2012 by Justice Charles Archibong, whose decision in the case later culminated in his compulsory retirement from the bench.

Archibong, in a judgment he delivered on April 2, 2012, struck out the 26 counts contained in a charge filed by the Economic and Financial Crimes Commission (EFCC), against Akingbola.

He said this was on the grounds that the prosecution was not diligent in handling the case.

The judge described the EFCC prosecution team as a drain in the public purse and directed the Attorney-General of the Federation to disband the team.