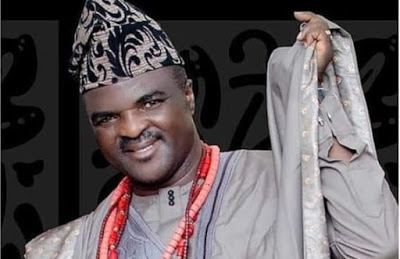 … ‘Stand Out’ reveals the true creator of Fuji music – Obesere

…to be released on Monday

Mr Sunday Esan, the chief executive officer of one of Nigeria’s prominent entertainment companies, Okiki films and music productions, has said the highly anticipated new album of fuji music icon, Abass Akande Obesere, is a blockbuster assuring fans of the living legend of good value for their money.

According to him, the upcoming album, titled ‘Stand Out’ will be released across Nigeria and worldwide on Monday, July 27.

Mr Esan, one of Nigeria’s finest films and music promoters disclosed this to newheadline247 Saturday.

He said Obesere has come out to make a powerful statement while emphatically announcing his return to the centre stage with the new album – very deep, lyrical and danceable.

“This much expected new album is no doubt one of the very best of Obesere’s albums and the title – ‘Stand Out’- says it all,” Esan said.

Tracks like ‘stand out’, ‘who you help, ‘shut up’ and ‘alabiyamo’ were listed as the key lines to watch out for.

Esan, a veteran in the industry with over 15 years of strings of unblemished quality films and music productions, added that none of Obesere’s previous hit albums can match the new ‘Stand Out’.

“I have been in this business for so long and I have listened to all Obesere’s albums and I can also categorically state that Papa has not done any album, that will be able to match this.

“This is deep, very lyrical and also danceable. Papa was at his best, using his “Ashakasha” style. I am sure Papa is vehemently announcing his return in a big way and I am happy to be part of this from the inception of the album till date,” Esan was quoted to have said.

Obesere, the paramount king of fuji music, also disclosed that he had worked meticulously on the new album with a sole objective of coming up with quality products that his fans and listeners would be proud of.

“We have been working on this fantastic album for the past 7 months and I am happy that we now have what my fans will be proud of. It is danceable and at the same time teaches morals,” Obesere said.

Speaking on controversies surrounding the fuji music originator, Papa, as Obesere is fondly called by fans and admirers, in one of the tracks expounds on who truly created this genre of Nigerian music.

He said, “The 2nd track is also about the controversy on who truly created or started the fuji music. In all, I am assuring my fans and all music lovers, that this is the best album for the season.”

Obesere, the ‘to sibe‘ exponent, further thanked Mr Esan and his entire crew for their immense contribution during the production of the album.

“Kudos to all my crew and my chairman, Okiki films on this. We are surely an unbeatable team,” he said.