Ghana: Stop taking credit for our projects – NDC to Akufo-Addo 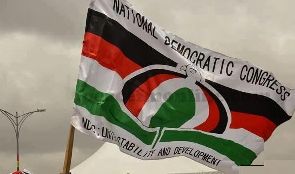 Stop taking credit for our projects – NDC to Akufo-Addo

The Western Regional caucus of the National Democratic Congress has admonished the ruling government to focus on its core mandate and desist from propaganda, GhanaWeb reports.

In a press conference addressed by its Deputy, Communication Officer, Dr Richard Kirk-Mensah, stated that most of the developmental projects in the region were started by the former NDC government as such the ruling NPP can’t take the credit for them.

some roads construction currently going on in the Metropolis were signed and awarded by the previous NDC government hence the NPP government should give credit to the previous government led by His Excellency John Mahama when it is necessary. He noted

He, however, added that government is a continuous process hence the NPP government should continue the landmark infrastructural projects the NDC government led by His Excellency John Mahama initiated in the Metropolis and other areas in the Region.

“The communication outfit of the NDC in the Region will continue to expose the lies of this propaganda propelled government being led by President Nana Addo and his Vice Dr. Bawumia”, he emphasized.

Below is the full statement;

Good morning Ladies and Gentleman from the media, and the entire citizenry of Sekondi -Takoradi.

We all know that the President of the Republic is on a three day tour in the Region and it is scheduled that the president will be in the sekondi Takoradi metropolis this morning.

Let me use this medium to welcome him to our peaceful Metropolis.

It has been in circulation for the past few days that the President of the republic among his visit to the metropolis will inspect the ongoing market circle asphaltic overlay being executed by Justmoh construction limited. We wouldn’t have been bothered if the president is only inspecting the ongoing works and give credit to the previous NDC government which awarded and started this magnificent edifice that has beautified and given a facelift of the metropolis which happens to be the 3rd biggest in the country.

Our main concern is the lies and deceit that NPP communicators in the metropolis peddling about such project hence my outfit need to set the records straight.

We are reliably aware of documents that the ongoing road construction works in the metropolis especially the asphaltic overlay, the Kansawrodu by pass 2nd phase, Effia Nkwanta – Fijai by pass etc are roads that were signed, awarded and started by the previous government.

Ladies and gentlemen for the avoidance of doubt let me give you a brief history of such a project. In 2014 when the then President visited the Western Region;

The Chiefs in the Metropolis requested the NDC government to take a look on the roads in the metropolis, hence the then President, His Excellency John Mahama promised the people of Sekondi Takoradi that very soon a contractor would be on our roads, in fulfilling his promise in April 2015 a sod was cut to commence the 1st 25km asphaltic overlay in Takoradi.

Subsequently, another 25km was added and the in 2016 the last 25km was also awarded, making it a total of 75km.

The current ongoing asphaltic projects you are witnessing in the Sekondi Takoradi are part of the last 25km that the Justmoh construction is undertaking to complete his projects.

We believe the government is a continuum process and we expect the current government to continue the landmark infrastructural projects the NDC government led by His Excellency President Mahama initiated in the metropolis but give credit where it is due to it predecessors.

It is strange that NPP continues to peddle lies even after they have successfully lied their way to power.

I challenge the NPP government to provide any documented evidence of any road contract they have awarded or signed in the Metropolis ever since they assumed office seven months ago.

The communication outfit of the NDC in the Region will continue to expose the lies of this propaganda propelled government being led by President Nana Addo and his Vice Dr. Bawumia.

We believe in a matter of time Ghanaians will know the mistake they have done by exchanging their brand new smart coloured TV with old outmoded black and white TV.