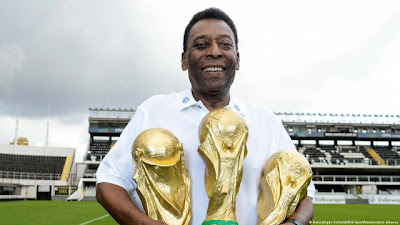 Pelé, the only player to win the FIFA World Cup three times, passed away on 29 December 2022 at the age of 82 to leave the football world in mourning

ZURICH, Switzerland, January 3, 2023/ — Memorial held at the stadium of Santos FC where Pelé spent most of his playing career; Gianni Infantino attended alongside Presidents of CONMEBOL and the CBF; FIFA (www.FIFA.com) President suggests that all Member Associations should name one stadium after Pelé.

FIFA President Gianni Infantino paid his final respects to Pelé when he attended a memorial for the legendary Brazilian at the Vila Belmiro stadium, home of Santos FC. The FIFA President was accompanied by Ednaldo Rodrigues, President of the Brazilian Football Confederation (CBF), and Alejandro Domínguez, President of CONMEBOL and a FIFA Vice-President. They were greeted by Andrés Rueda, the President of Santos FC, the only Brazilian club Pelé played for and where he spent 18 years of his career.

Pelé, the only player to win the FIFA World Cup three times, passed away on 29 December 2022 at the age of 82 to leave the football world in mourning. Thousands of fans began queuing overnight outside the stadium for the wake, which was due to last for 24 hours, starting on Monday morning.

Pelé’s coffin was placed in the middle of the pitch so that people could pay their respects. On Tuesday, a procession carrying his coffin will pass through the streets of Santos, ending at the Ecumenical Memorial Necropolis cemetery, where he will be buried in a private ceremony.