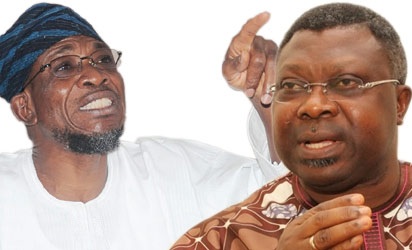 ……Says governor lacks moral right to demand accountability from anyone

Former Deputy Governor of Osun State, Senator Iyiola Omisore on Tuesday declared Governor Rauf Aregbesola’s administration holds the record as the most inept, prodigal and corrupt in the history of South-West Nigeria.

He said the governor also lacks moral right to demand accountability from anyone.

Newsheadline247 understands Mr Omisore said these while responding to Aregbesola’s outburst that he (Omisore) should tender an apology for challenging the state government to explain the role of UNESCO in the construction of the road leading to Osun grove. He described Aregbesola’s demand as laughable.

Mr Omisore said, “The government of Governor Rauf Aregbesola lacks moral right to demand accountability from anyone judging from its own lack of such value.”

The former Deputy Governor in a statement sent to Daily Post NG by his Media Coordinator, Mr. Olasina Oladele, declared that there is no doubt that Aregbesola’s administration holds the record as the most inept, prodigal and corrupt in the history of the South West region.

Omisore said “There is no doubt that the Aregbesola government holds the record as the most inept, prodigal and corrupt in the history of South-West.

“A government that does not understand the meaning of conscience cannot talk about it. Over and over we have asked the Osun government and Aregbesola to justify the huge amount of debts they have racked up for the state while throwing the people into poverty. But up till now, all they have engaged in are blatant lies and propaganda.

“Making reference to projects like “the multibillion naira Opon Imo, a contract that was allegedly awarded to or co-ordinated by the governor’s son, N20.9 billion garment factory, RLG factory, white elephant Osun Airport that has gulped billions of Osun people’s money, it is unfathomable how Aregbesola is able to sleep in the night knowing full well that his government is running on deceit.

“If you claimed you have spent about N8 billion naira on Opon-Imo, it is sure every secondary school student in Osun State must have the device. Or how much does one piece of the tablet cost? But go to the schools, ask the students about Opon-Imo and they will just laugh in your face. Some of them will even tell you it is Opon-Eemo, meaning phantom, because they have never seen it in their schools.

“That is one of the achievements Aregbesola has been bandying about, but the government has no explanation for the failure the state has been recording in WASCE and SSSCE, which never happened under Peoples Democratic Party (PDP) government in the state.”

While emphasising the worsening socio-economic situation in the state, the former Chairman, Senate Committee on Appropriation, said the government had “thrown many Osun workers and other residents into “unquantifiable poverty”.

He said “Many businesses have collapsed in the state. People are dying, yet the debts of the state keep mounting. and this government has kept on borrowing, not minding what happens to the future of the younger generations.”

He said, “I also read the barefaced lie-driven attempts by the government and its agents disguising as rights organisation to justify and cover up the mammoth fraud going on in Osun State.

“I challenge these collaborating rights groups and all the genuine ones to unearth the mystery surrounding Osun State loans and bonds secured by the Aregbesola government, as well as the projects purportedly executed with them,” Omisore said, adding no matter how long it took, “the evil spell cast on the people of the state by this diabolical clan will expire very soon by the grace of God”.