HomeNewsGov Makinde vows to counter moves made to cause ethnic crisis in...
FeaturedNews 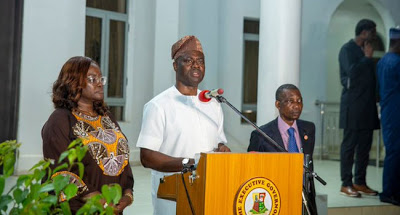 An indigene of the State, Sunday Igboho, had given Fulanis in Ibarapa axis an ultimatum to leave the area

Governor of Oyo State, Mr Seyi Makinde has said his government will resist all attempts by anyone or group to cause ethnic tension in the State warning that no one should harass those carrying out their legitimate businesses across the State.

Makinde stated this when he received the new Commissioner of Police in Oyo state, Mrs. Ngozi Onadeko who paid a courtesy visit to the governor’s office.

An indigene of the State, Sunday Igboho, had given Fulanis in Ibarapa axis an ultimatum to leave the area over alleged criminality by herdsmen leading to anxiety in the area.

Igboho was shown in a video shared on social media holding a well-attended rally where he vowed to evict Fulani herdsmen from the entire Yorubaland for causing insecurity and banditry.

But, the state governor, Mr Makinde, said his government and security agencies need not wage war against any particular ethnic group but against criminal elements, irrespective of their tribes, religions, or creed.

Makinde added that his administration would not allow anyone to threaten the peace of the state by acting unlawfully and saying things that are alien to the Nigerian Constitution, noting that acts that are capable of causing chaos in the state will not be accepted.

The governor promised that his administration would continue to synergise with all security agencies in the state to fight criminals, hoodlums and bandits irrespective of their tribes, religions, or creed, while urging the police to arrest miscreants causing tension and threatening the peace of the state.

“For people stoking ethnic tension, they are criminals and once you get them, they should be arrested and treated like common criminals,” Makinde said.

“For this administration, the major pillar for us is security, because we know that all the good economic plans we have won’t be possible in an atmosphere of chaos and insecurity.

“So, when people say things that are neither lawful nor within the spirit of Nigeria’s Constitution, it is not acceptable here. And they cannot hide under the guise of protecting Yoruba’s interest to perpetuate chaos in the state.

“I am sure that since you came in, you must have heard about some things happening at Ibarapa axis of the state. I will still say it here that we are not after Hausa-Fulani. We are after criminals.

“We are after hoodlums and bandits irrespective of their tribe, religion, or creed. Those are the people we are after. If you look into the records, when we had the armed robbery incident at Okeho in Kajola Local Government Area of the state, some people were killed, some were arrested and we found out that they were from Ebira, from Kogi State. So, we want to go after the criminals – whether they are Yoruba, Hausa, Fulani or whomever they are.”

NEWS: SECURITY IS THE CONCERN by Layi Deinde