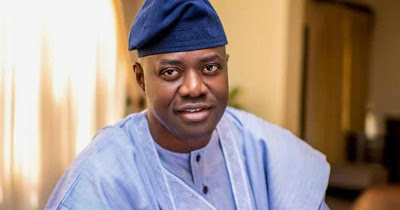 …only peaceful and harmonious coexistence would lead the state and the country to greater heights.

Oyo State Governor, Mr Seyi Makinde, has said his government would declare the Hijrah holiday, the Islamic New Year day, in line with the yearnings of the Muslim community starting from 2022, the year 1443 of the Islamic calendar.

The governor who made the declaration on Wednesday during the celebration of 2021 Mawlud Nabiyy, held at the Remembrance Arcade of the Government House, Agodi, Ibadan emphasized the need for the Muslim faithful and non-Muslims as well to continue to peacefully coexist.

According to a statement by his Chief Press Secretary, Taiwo Adisa, Governor Makinde said the state will always rise above the antics of perpetrators of evil trying to plunge the state into chaos.

Makinde also stressed that only peaceful and harmonious coexistence would lead the state and the country to greater heights.

He further implored Muslim faithful in the State to emulate the peaceful way of life of the Prophet Muhammad (SAW) by following his legacies, urging all residents of the state to live in unity.

“Some are saying the governor does not want us to be celebrating Mawlud Nabbiy. That is not true. Last year, I believe we missed it. And when S.A. Islamic Affairs came to meet me that it will be nice to hold the programme this year, even despite the COVID-19 pandemic, I gave him the go-ahead.

“We agreed on the date to choose, which would be convenient for our Imams, Alfas and others and that was why we chose today. I even told him that it is better we are late on it than not holding the event at all. But now, we know what is right and the promise is, from this point forward, we will be celebrating the event.”

Governor Makinde said his Special Adviser on Economy and the Director-General of Oyo State Investment and Public, Private Partnership Agency (OYSIPPA) briefed him on the need for the holiday but the matter could not be concluded.

The governor added that since the Aare Musulumi raised the matter again and from his consultation, which confirmed it was the wish of the people, he would declare the holiday from next year.