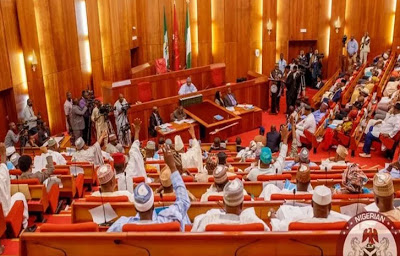 There was uproar in the Senate on Wednesday when the Minority leader, Enyinnaya Abaribe, made a call that the President Muhammadu Buhari-led administration should quit following alleged inability of the federal government to provide a solution to protracted insecurity in Nigeria.

This came during the over five hour-marathon debate on the rising insecurity in the country.

The motion, which sparked the debate that was intended to proffer legislative solutions to the security problems facing the country, has the name of all the senators attacked as sponsors.

Issues of state police, lack of coordination and lack of synergy among the security agencies, lack of political will, and the expiration of the tenure of the service chiefs formed the thrust of the debate.

When the debate was thrown open, Abaribe, who was the first senator to speak, went straight to the issue when he said that “he who lives by propaganda will die by propaganda.” He lamented that instead of taking practical steps to address the security issues, government officials kept deceiving the people that the Buhari administration had defeated insecurity.

Abaribe’s position attracted intermittent interventions from the Senate President, Ahmad Lawan, who preached against what he called the use of hate speeches during the debate. On the submission that the government had failed, Lawan said: “This government was re-elected because it had done well.”

But Abaribe insisted that this administration deserved to be “stoned out of power” for not living up to the expectations of Nigerians. He accused the government of using propaganda to deceive Nigerians that security was being restored.

“We are very serious here, this is a matter of life and death! They had said that Boko Haram had been defeated, that Nigeria is now safer. Everything is being done to make sure that the hard work that is supposed to be in place in securing Nigeria is not there because certain people are not doing their work but prefer to cover the eyes of Nigerians with propaganda.

“We have wasted time in Nigeria trying to find all these excuses for non-performance. Reality is no respecter of persons and it is the reality we are facing now. Senator Sani Musa was shouting everyday that his people were being killed in Niger, we just took one motion on a student who was murdered by a Boko Haram and we were told that the killers had been defeated,” Abaribe said.

And when he became sure that maximum attention was being paid to his debate, the minority leader hit the nail on the head when he asked President Buhari to resign immediately.

“To go to the fact of what we must do, we must have read on the pages of newspapers today where even you (the Senate President) have suggested that we should invite the inspector general of police (IG).

“The reason we reelected them was that they continued to tell us that they had the key to security, I agree with them. When you want to deal with a matter, you go to the head, so we will go to the government and ask this administration to resign because they can no longer do anything,” Abaribe submitted.