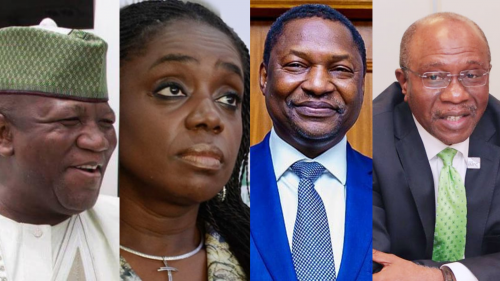 “The Nigerian government has reluctantly refunded part of the Paris Club Refund but deliberately failed to mention Joe Agi (SAN) as the hero who exposed fraud and secured its refund.”

The report said Agi was the lawyer who exposed and fought for the refund of the illegal deductions of the sum of $3.18billion corruptly deducted from the accounts of Local Government Areas in Nigeria at the Federal High Court in Suit No. FHC/ABJ/CS/130/2013.

The Nigerian government, which fraudulently deducted the money, has returned part of it to the LGAs following a court judgment, thereby making Buhari to approve the fund to the lawyer as his legal fees from the $3.18million Paris Club refund.

Sources in the presidency, however, informed SaharaReporters that the money was diverted by Malami, Yari, Adeosun and Emefiele to the Nigerian Governors’ Forum Account with Access Bank (No: 0720311376, Sort Code No: 044080565) from where it was siphoned using different accounts.

“The Nigerian government has reluctantly refunded part of the Paris Club Refund but deliberately failed to mention Joe Agi (SAN) as the hero who exposed fraud and secured its refund.

Despite the President approving some percentage of the money to him as legal fees, Malami and others have refused to pay him.

“They rather diverted the fund into their personal accounts.

“The conspiracy against the lawyer started by the former Governor of Zamfara state, Alhaji Abdulaziz Abubakar, who was then NGF chairman, the then Minister of Finance, Kemi Adeosun, unfortunately, Malami, the Attorney General of the Federation and the Governor Forum then conspired amongst themselves that the legal fees meant for the Senior Advocate of Nigeria be paid through the Nigerian Governors Forum account instead of my account as ordered by the Court.

“This conspiracy was effected through the Governor of Central Bank of Nigeria and this legal fees was criminally diverted into the so called Nigerian Governors Forum Account, with Access Account No: 0720311376, Sort Code No: 044080565 from where the funds were siphoned using the under-listed accounts.

The source added that the Economic and Financial Crimes Commission despite being aware of the fraudulent activities refused to investigate Malami, Adeosun, Emefiele and Yari.

“The EFCC has colluded and condoned the fraud by refusing to investigate the fraud after almost four years,” he said.