HomeNewsI am not a sectional governor – Abiodun reacts to alleged neglect...
News 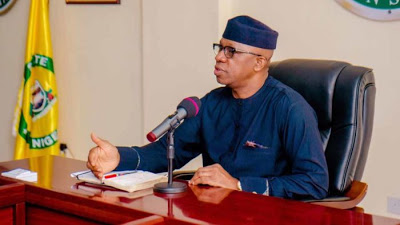 “I’m not Governor of Ogun East, Central or West; I am Governor of this State and I have a responsibility to every citizen of this state…”

Ogun State Governor, Prince Dapo Abiodun, has reassured that his administration will not sideline any part of the state from its development agenda.

Abiodun, who said he does not want to be profiled as a sectional governor, declared that he is totally committed to leaving the state better than how he met it.

The Governor made these known in his address at the virtual consultative meeting for Ogun West Senatorial District on the 2021-2023 Medium Term Expenditure Framework (MTEF) and 2021 Budget held at the Executive Chambers of the Governor’s Office, Oke-Mosan Abeokuta.

Apparently speaking against the backdrop of recent agitation in some quarters, Abiodun promised to mandate the Commissioners for Works and Infrastructure as well as Transport to meet with the people of Ogun West, go back to the drawing board and examine the list of roads that have been presented for the axis.

He said whatever list that comes out of the meeting would be considered as priority for the people of the Senatorial district.

While pointing out that he is not Governor for any particular Senatorial district but for the whole State, Abiodun said he also intends to live up to the responsibility of governing for all and sundry.

He said, “I am going to mandate the Commissioner for Works and Commissioner for Transport to sit down with our people from Ogun West ably led by the Olu of Ilaro and a few community leaders to now go back to the drawing board, look at the list of roads that has been presented to us that we are implementing in phases and compare it to what their priority roads are and my promise to you is that you probably find out that some of the roads you are suggesting are already on our list.

“My promise to you is that whatever list comes out of that meeting will now be considered as the priority roads of Ogun West and we will begin either the construction or rehabilitation in phases as we can get funds to support them.

“I’m not Governor of Ogun East, Central or West; I am Governor of this State and I have a responsibility to every citizen of this state and by the grace of God, I intend to live up to those responsibilities.”

“I will like to say that till date, we’ve done about one hundred and forty board appointments, board membership, membership of commissions and chairman of different boards and I believe that this administration has been disposed to being as equitable as possible and I am not sure that Ogun West has had as many board appointments as they’ve had under this administration in time past,” Abiodun said.

The Governor explained that the appointment percentage of his administration reflects that Ogun West, Central and East gulped 30 per cent, 33 per cent and 38 per cent respectively.

The Governor urged stakeholders not to paint a picture that is deplorable or create an impression in the mind of the people that the present administration was focusing on one district at the expense of others.

Abiodun, who stated that he is fully committed to developing all the three Senatorial districts of the state, added that his administration would continue to do all it can to ensure that citizens of the state enjoy the dividends of good governance.

“I don’t want us to paint a picture that is so deplorable or plant a seed or an impression that there is a deliberate attempt by me or this administration to develop some other parts of the state or abandon or for any reason, not develop Ogun West. I am committed to developing this Senatorial District. There is no deliberate attempt to sideline any part of this state, talkless of Ogun West,” he added.

Earlier in his remarks, the Olu of Ilaro and Paramount Ruler of Yewa land, Oba Kehinde Olugbenle, recalled that no single road was done and commissioned by the last administration in the Ogun West Senatorial District of the state.

He, therefore, called on Governor Abiodun to come to the aid of the zone and make life more meaningful for its people by speeding up work on some road projects being done in the axis.

The monarch, who appealed to the state government to endeavour to give stakeholders a copy of the budget for appraisal, said the appraisal would avail them the opportunity to determine and score the activities of Government at the end of every year.

A Muslim cleric from the district, Alhaji Tajudeen Adewunmi, who urged the people of the state to support the government by paying their taxes regularly, opined that close to 70 per cent of the population of the state does not pay their taxes.

Adewunmi, who also noted that if all the 70 per cent could remit their taxes to the coffers of government, there would have been even development across the land.

“We need to support the Government of the day by paying our taxes. People no longer pay their taxes. About 70 per cent of the population doesn’t pay taxes. If a thousand Naira is paid by those 70 per cent, can you just imagine what the state can achieve? Let us support the government,” he said.