IGP’s Appointment: Buhari opens up on why he picked Usman Baba instead of Jitoboh 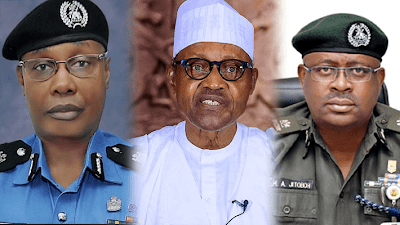 Baba’s appointment, which will be forwarded to the Senate for confirmation, will effectively deny Jitoboh, the police chief from Bayelsa, who should have been the inspector general in line with the law.

President Muhammadu Buhari has revealed why he picked Usman Baba over Moses Jitoboh as the acting inspector general of police following questions raised by some Nigerians over his choice.

The president said he chose Baba ahead of Jitoboh because the former has been a policeman for a long time and “has the necessary experience,” according to NAN.

Baba’s appointment, which will be forwarded to the Senate for confirmation, will effectively deny Jitoboh, the police chief from Bayelsa, who should have been the inspector general in line with the law.

Buhari, who announced the acting police chief’s appointment while in London, insisted he followed due process in selecting the new police chief.

President Buhari said, “Well, we went through the system. There was a committee by the Minister of Police Affairs, they gave me some names, and he happened to be the one chosen.

“He knows his job. He has been in it for a long time. He went through all the training. He has the necessary experience.”

“So, we have a high expectation from him,” the president added.

He gave the charge while assessing the performances of the new service chiefs and the tasks before them and that of the acting inspector general of police.

While fielding questions from State House correspondents on his arrival from his London medical trip, Buhari explained, “They (service chiefs) have been in the system all the way. They know what is wrong.”

He further said, “They know what is right, and I think they are doing their best.

“I hope their best will be good enough for Nigeria.”

Those at the airport to welcome the president included the Chief of Staff to the President, Ibrahim Gambari, Minister of the Federal Capital Territory, Muhammed Bello, and the National Security Adviser to the president, retired Maj.-Gen. Babagana Monguno.

After a brief welcoming ceremony at the airport, the president boarded a presidential helicopter that conveyed him to the Presidential Villa.

Mr Buhari had, on March 30, departed Abuja for London for a so-called routine medical check-up.