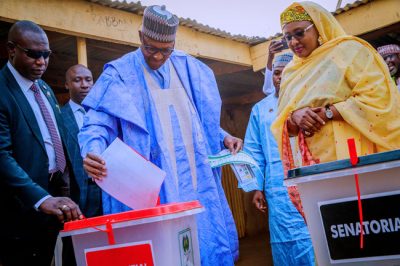 The Independent National Electoral Commission (INEC) made the first official declaration of result of the presidential election announcing President Muhammadu Buhari of the All Progressives Congress (APC) as the winner of the contest in Ekiti state.

In the result announced by the returning officer, Professor Idowu Olayinka, vice chancellor of the University of Ibadan, Buhari of the APC polled 219,231 votes, while Atiku Abubakar of the Peoples Democratic Party  (PDP) got 154,032 votes.

The APC has already won two of the Senate seats for the state and several House of Representative seats.

newsheadline247 - June 29, 2022
Tasks Nigerians, NCoS Personnel On Attitudinal Change The Minister of Interior, Ogbeni Rauf Aregbesola, has called on the judicial arm of government to support the...
News

newsheadline247 - June 28, 2022
A female staff of Sterling Bank Plc, Effurun, Delta State Branch, Favour Fame-Eruagbere, is reportedly on the run after allegedly defrauding customers of the...