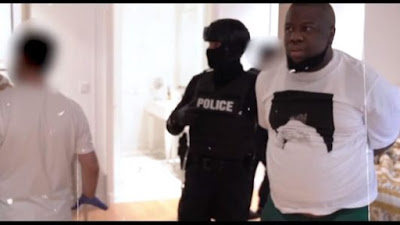 Hushpuppi and Woodberry were arrested by Dubai police last month for defrauding over 1.9 million people, majority of them, reports identify as Americans.

Christopher Wray, the Director of the Federal Bureau of Investigation (FBI), has praised the exceptional efforts exerted by the United Arab Emirate, represented by the Dubai Police General HQ, in combating transnational organised cybercrime including the recent arrest of Raymond Igbalode Abbas, known as “Hushpuppi” and Olalekan Jacob Ponle aka “Woodberry” who were taken down in operation “Fox Hunt 2”,” Dubai Police said on Thursday.

“Mr Wray also extended his appreciations to Dubai Police for their cooperation in extraditing the wanted criminals, who committed money-laundering and multiple cybercrimes, to the United States.”

Their arrest in an operation codenamed Fox Hunt 2 came after about four months of painstaking investigations into their activities, during which their social media activities were monitored by the highly trained police unit.

The video posted by the Dubai Media Office said their police were able to track the locations of the suspected fraudsters using their social media activities.

Dubai Police said the raid resulted in the seizure of incriminating documents pertaining to a well-planned international fraud worth Dh1.6 billion – N169 billion.

They were accused of leading an “international” online fraud network that was committing crimes outside the UAE, including money-laundering, cyber fraud, hacking, criminal impersonating, scamming individuals, banking fraud and identity theft.

A California-based cybersecurity firm Agari said on Tuesday, May 19, that “some if not all” of those who committed the fraud are part of a Nigerian fraud group Scattered Canary.