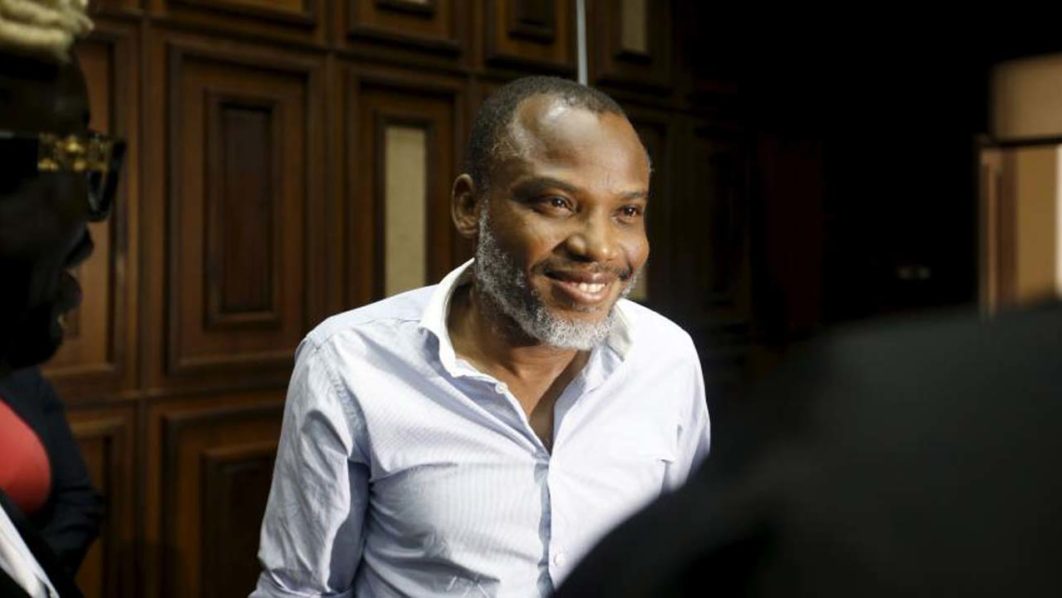 The runaway leader of pro-secession group, Mr. Nnamdi Kanu, has been dismissed and accused of fleecing the Indigenous People of Biafra (IPOB).

Reports say he has been replaced with Mr. Ezenwachukwu Sampson Okwudili.

“Kanu privately collected £14 million and another $22 million to purchase landed properties abroad in his name and that of his father, Mr. Igwe Israel Kanu, in a clear case of monkey dey work baboon dey chop,’’ the accusation trailed.

“Kanu turned our collective struggle into a money-making enterprise for himself and his father,’’ Radio Biafra said.

The pirate radio of the groups which returned to air said that Kanu has also been sacked as the Director of the Radio.

The radio’s programme started with the lady announcer who gave her name as Miss. Ifeoma Okorafor.

She stated that the radio was back on air and IPOB was restructuring and announced the dismissal of Kanu.

Kanu has not been seen publicly since he fled Abia State after the military raided his family compound some months back.

The reasons the Radio Biafra announcer gave for Kanu’s removal included his alleged personalization of the Biafran struggle and derailing from the core objectives of IPOB as a grassroots movement.

He was also accused of inciting members of IPOB towards violence leading to the death of many innocent young people in Onitsha, Aba and Umuahia, an action IPOB said was “totally unacceptable and grossly irresponsible’’.

“Thus the monies contributed by enterprising and hard-working Igbo youths across the world are being collected and converted by one man and his father while pretending to be sacrificing for the cause.’’

Upon his release from detention in April 2017, IPOB explained that Kanu was expected to have moved for the release of his accomplices and co-detainees – Messers Chidiebere Onwudiwe, Benjamin Madubugwu and David Nwawuisi.

“These are our brothers who were arrested at the same time with him and they should not be forgotten. We hereby demand their release.

“Kanu, since his release, has never spoken about them or appealed for the release of these our freedom fighters. Instead, he has been going about collecting chieftaincy titles and having a messianic swagger that even allowed full-blooded Igbomen to kneel down and kiss his feet.

“Kanu threw away the original meaning of our collective struggle for personal gain and vain glorification. IPOB believes in democracy as a solid base of any modern state, the rule of law, and will always reject violence in all its ramifications.’’

The action against Kanu is visible in the twitter pages.

According to Jubril Gawat, “Radio Biafra announces the dismissal of Nnamdi Kanu as Director accusing him of collecting £14m & another $22m to purchase landed properties abroad in the name of the movement.”

FLASH: Radio Biafra announces the dismissal of Nnamdi Kanu as Director accusing him of collecting £14m & another $22m to purchase landed properties abroad in the name of the movement.

Chxta‏ said “I’m hearing that Radio Biafra has come back on air and announced the sack of Nnamdi Kanu as leader of IPOB.”

According to Kemi Ariyo, “IPOB sacks Nnamdi Kanu as director of Radio Biafra, replaces him with Mazi.

This is someone whom they claimed “Nigerian Army killed or kidnapped”

IPOB sacks Nnamdi Kanu as director of Radio Biafra, replaces him with Mazi.

This is someone whom they claimed “Nigerian Army killed or kidnapped”?? pic.twitter.com/wwI2qJzJBO