HomeNewsKashamu: People can mourn me the way they like when I die...
FeaturedNews

Kashamu: People can mourn me the way they like when I die – ex-President Obasanjo 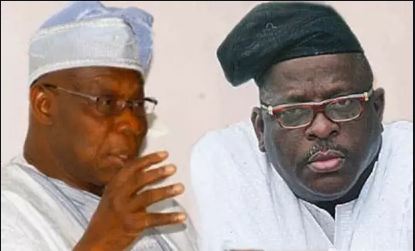 Former Nigerian President Olusegun Obasanjo, has responded to the criticisms that have trailed his controversial condolence message on the passing of Buruji Kashamu, a former senator and leader of the Peoples Democratic Party in Ogun State, Premium Times NG reports.

Obasanjo in a controversial condolence message, said late Mr Kashamu, who was wanted in the U.S for alleged drug offences, was able to escape justice but could not evade death.

“Senator Esho Jinadu (Buruji Kashmu) in his lifetime used the manoeuvre of law and politics to escape from facing justice on alleged criminal offence in Nigeria and outside Nigeria,” Obasanjo said.

“But no legal, political, cultural, social or even medical manoeuvre could stop the cold hands of death when the Creator of all of us decides that the time is up.

“May Allah forgive his sin and accept his soul into Aljanah, and may God grant his family and friends fortitude to bear the irreparable loss,” he added.

Several Nigerians subsequently attacked Obasanjo in reactions to his remarks which they say demonstrated disrespect for the dead.

A former governor of Ekiti state, Ayo Fayose said, “He (Obasanjo) should also remember that his own end will come too and nobody knows how the end will be.”

“Can Obasanjo say in good conscience that he did not at some point collaborate with Kashamu and most of the things he (Kashamu) did politically were not with his collaboration?” Mr Fayose said.

“I thought that our culture is that every fight ends once one of the parties die?” Joe Abah, a policy analyst, said of Mr Obasanjo’s comment.

Bola Tinubu, a former governor of Lagos state and a national leader of the All Progressives Congress, in his condolence message, said people should be kind to the dead since everyman would die someday.

But Obasanjo in his response to the criticism told Premium Times, Sunday, it was okay for people to mourn every death but that the living, including himself, must draw the right lessons from the lives of those who have died.

He said it is only in doing this that societies can make progress.

“When I was growing up, in our community, when anyone known with bad character died, we usually only mourn him and bury him. No eulogy. No praise-singing.

“There is an English saying that urges us never to talk ill of the dead. But in this case, we are not talking ill of the dead. We are only drawing lessons from the life and history of the dead. I am not gloating over his death. It is sad for anyone to die and we must mourn him.

“But we must learn from such a passage. There will be bad lessons. There will be good lessons. But we should not just be praise-singing or eulogising the dead, especially when there is no need to do so.

“We should not cover up bad histories and conducts so that the right lessons can be learnt,” he said.

The newspaper thereafter told Obasanjo that were already suggestions by his critics that on his passage, he might be mourned in the manner he did Mr Kashamu.

The former president responded, “As you know, I say my mind as truthfully as I know them and in line with my convictions. People are free to say whatever they want about my comment. I don’t begrudge people for holding opinions on whatever I say or do.

Mr Kashamu, a controversial politician who for years was wanted by the U.S government for alleged drug offences but managed to beat repeated extradition attempts, died in Lagos Saturday from coronavirus complications.

He was buried on Sunday in his home town, Ijebu-Igbo, Ogun state.