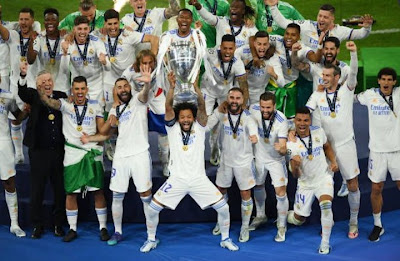 Spanish giants, Real Madrid have won their 14th Champions League after beating Liverpool 1-0 on Saturday in the 2021/2022 final in Paris, France.

Vinicius Jr who scored the winner put Madrid ahead in the 56th minute of the encounter.

Real Madrid’s goalkeeper, Courtois, put up an impressive performance to deny Liverpool’s Mo Salah an opportunity to equalise in the game.

Former England international, Gary Lineker, who congratulated Real Madrid in a Tweet post immediately after the match submitted that the team won with “Great character”.

Lineker, of course, highlighted Thibaut Courtois’ display, tweeting that the Belgian is a “truly great goalkeeper”. Hard to argue with that.

“Congratulations to Real Madrid who have repeatedly defied the odds this season to win the Champions League,” Lineker said. “Great character, a winning mentality and a canny manager…oh, and a truly great goalkeeper. Well played.”