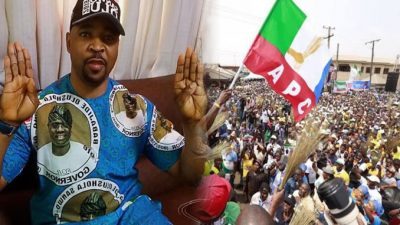 Musiliu Akinsanya, aka MC Oluomo, one of the leaders of the National Union of Transport Workers (NURTW) may be flown abroad for further treatment on the injury sustained during the fracas that erupted at the flag-off of the Lagos State All Progressives Congress (APC) governorship campaign.

A close aide of the union leader revealed this to The Punch NG on condition of anonymity on Thursday.

The source disclosed that MC Oluomo would travel any time soon as plans had been concluded for his treatment by a specialist in the United States where he is a citizen.

This is just as the newspaper gathered that no fewer than three police vans were keeping guard at the hospital – Eko Hospital – where the patient is being treated.

According to The Punch NG, Politicians of different calibre were said to have visited the hospital, as security operatives screen everyone going in to see him.

MC Oluomo was among the people injured at the inauguration of the All Progressives Congress campaign at the Sky Power Ground, Ikeja, on Tuesday.

Rival factions of the NURTW had clashed at the event.

MC Oluomo was allegedly stabbed in the neck and side with a knife.

The aide said, “He was stabbed in the neck and by the side with what they call makanje (poisoned knife). He is a citizen of the United States, so there cannot be any problem with his medical treatment abroad. In fact, he will be flown out in a few days for better medical care. Contrary to what they are saying, Baba (MC Oluomo) is not dead.”

A source at the hospital said, “Top politicians have been coming to see him. The level of security is high. Three police vans are here.”

The Chairman of the NURTW in Lagos state, Tajudeen Agbede, could not be reached as his mobile phone was switched off.

The spokesman for the Lagos State Police Command, Chike Oti, said, “A total 16 suspects have now been arrested in connection with the clash. The police are not aware of any treatment abroad; such is a private arrangement. It has nothing to do with us.”