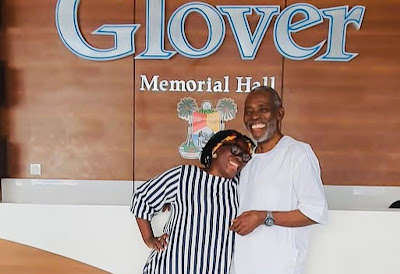 The Lagos State Government has handed over the management of the iconic Glover Memorial Hall to Lufodo, a theatre and film production company founded and owned by actors, Olu Jacobs and Joke Silva, in a public/private partnership venture.

The Glover Memorial Hall, is a heritage building for theatre and performing arts in Lagos. It was built in 1887 in honour of the second governor of Lagos Colony, Sir John Hawley Glover. It was, in 1903, the first to host the public screening of a film in Nigeria.

Lufodo won after a rigorous bidding process for the concession to manage it.

Speaking during the short hand-over ceremony, the Commissioner for Tourism, Arts, and Culture Uzamat Akinbile-Yusuf, said Lufodo Productions was appointed due to its expertise, envisaging that the organisation would further enhance the visibility and viability of the hall.

Lufodo in partnership with ciuciconsulting – a leading consulting and operations management firm – will manage GMH for the next five years.

This partnership will have both Mrs. Jacobs and Ifeoma Monye as co-CEOs. Mrs Jacobs will be in charge of artistic direction and Ms Ononye, operations.

Also, a new board has been established with Gbenga Oyebode as the Chairman. The board members include Taiwo Taiwo, Ms Silva, Tony Rapu, Soji Jacobs, Ifeoma Monye, and Amina Abubakar Bello.

The 1000-capacity Glover Memorial Hall was refurbished by the project contractor, Sustainable Procurement Services Ltd, and handed over to the Lagos State Government in March 2021.