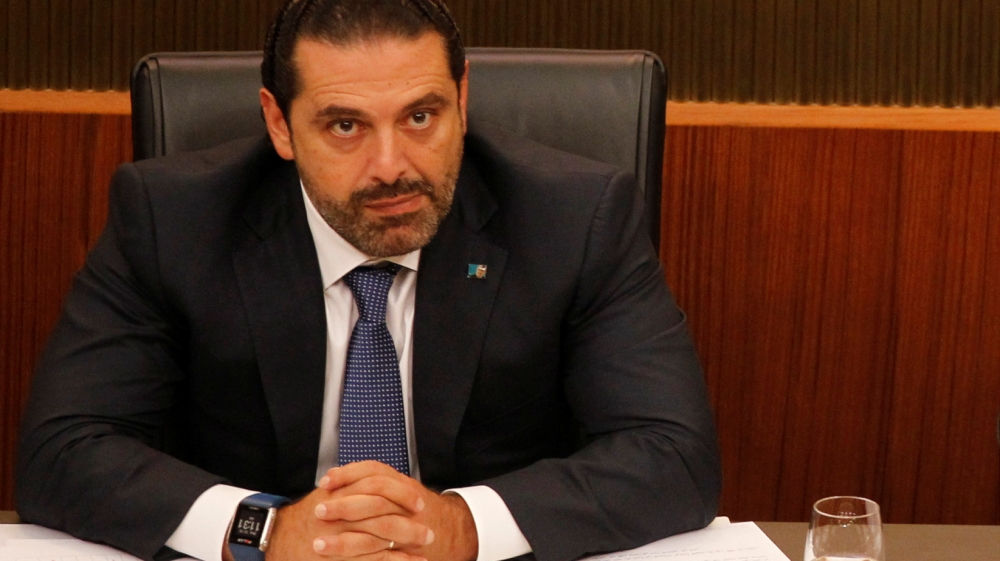 BEIRUT (Reuters) – Lebanon’s Prime Minister Saad al-Hariri resigned on Saturday, saying he believed there was an assassination plot against him and accusing Iran and its Lebanese ally Hezbollah of sowing strife in the Arab world.

His resignation, a big surprise to Beirut’s political establishment, brought down the coalition government and plunged Lebanon into a new political crisis.

It thrust Lebanon into the front line of a regional competition between Sunni Saudi Arabia and Shi‘ite Iran that has also buffeted Syria, Iraq, Yemen and Bahrain. A Saudi government minister said Hariri was in Riyadh to ensure his safety.

Hariri, who is closely allied with Saudi Arabia, alleged in a broadcast from an undisclosed location that Hezbollah was “directing weapons” at Yemenis, Syrians and Lebanese.

In comments directed at Iran, he said the Arab world would “cut off the hands that wickedly extend to it”.

Hariri’s coalition, which took office last year, grouped nearly all of Lebanon’s main parties, including Hezbollah. It took office in a political deal that made Michel Aoun, a Hezbollah ally, president, and was seen as a victory for Iran.

The resignation risks exacerbating sectarian tensions between Sunni and Shi‘ite Muslims and returning Lebanon to paralysis in government.

An official at the U.S. State Department said it was following the situation closely and noted that Hariri had been a “strong partner in building strong national state institutions and in the war on terror”.

The official added “the United States expects an orderly political process in Lebanon and will remain supportive of the legitimate institutions of the Lebanese state”.

It was not immediately clear who might succeed Hariri, Lebanon’s most influential Sunni politician.

The prime minister must be a Sunni in Lebanon’s sectarian system. Aoun must appoint the candidate with most support among MPs, who he is expected to consult in the coming days.

“We are living in a climate similar to the atmosphere that prevailed before the assassination of martyr Rafik al-Hariri. I have sensed what is being plotted covertly to target my life,” Hariri said.

Rafik al-Hariri was killed in a 2005 Beirut bomb attack that pushed his son Saad into politics and set off years of turmoil. A U.N.-backed tribunal has charged five Hezbollah members over the killing. Hezbollah denies involvement.

The Saudi-owned pan-Arab television channel al-Arabiya al-Hadath reported that an assassination plot against Hariri was foiled in Beirut days ago, citing an unnamed source.

Saudi Arabia’s Gulf Affairs Minister Thamer al-Sabhan said in a television interview that Hariri’s personal security detail had “confirmed information” of a plot to kill him.

Lebanon’s internal security force said in a statement on the reports that it had no information about the matter.

Hariri said Hezbollah and Iran had brought Lebanon into the “eye of a storm” of international sanctions. Iran was sowing strife, destruction and ruin wherever it went and he accused it of a “deep hatred for the Arab nation”.

Aoun’s office said Hariri had called him from “outside Lebanon” to inform him of his resignation. He has postponed a visit to Kuwait and directed military and security agencies “to maintain stability”, it said.

Sayyed Hassan Nasrallah, the leader of Hezbollah, will address Hariri’s resignation in a televised speech on Sunday, Hezbollah-affiliated media reported.

A member of Hezbollah’s central committee, Sheikh Nabil Kawouk, accused Riyadh of being behind Hariri’s resignation, saying in a speech reported by Lebanon’s al-Jadeed television: “God protect Lebanon from the evil of Saudi Arabia’s reckless adventures.”

Walid Jumblatt, the leader of Lebanon’s Druze minority, said Lebanon was too weak to bear the consequences of Hariri’s resignation, saying he feared political and economic fallout.

“We cannot afford to fight the Iranians from Lebanon,” he told Reuters, advocating an approach of compromise with Hezbollah in Lebanon while waiting for regional circumstances to allow Saudi-Iranian dialogue.

Iran’s Foreign Ministry said Hariri’s departure was a plot to “create tension in Lebanon and the region”.

Sabhan, the Saudi minister, echoed the language of the Lebanese politician saying in a tweet: “The hands of treachery and aggression must be cut off.”

Hezbollah’s close ties to Iran and its support for Syrian President Bashar al-Assad in his war with rebels have been a major source of tension in Lebanon for years.  (Reuters)