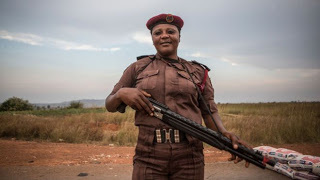 Source/BBC/ January 28, 2020— In our series of letters from African journalists, the editor-in-chief of Nigeria’s Daily Trust newspaper, Mannir Dan Ali, considers the controversy over the latest plan to deal with insecurity in his country.

Last week, I helped pay a ransom to free the kidnapped wife and two daughters of a friend. The three had been held for eight days after being snatched from their home in the northern city of Kaduna.

What I did no longer seems unusual and it’s just one of the many stories resulting from the current insecurity in this vast country.

The federal government has been accused of ineffectiveness and the governors of six states in south-west Nigeria have come up with their own answer.

They have announced that they plan to set up their own security outfit to be known by the Yoruba word for leopard – amotekun.

Exactly how it will operate is not yet known as the states are still finalising the plans, but it is set to involve employing new security personnel with the power to arrest.

Amotekun will also share intelligence and security infrastructure across the states.

The plan has riled the national authorities and led some to accuse the six states of plotting to secede from Nigeria, a diverse country of 200 million people. Yorubas are one of its three main ethno-linguistic groups.

But if anyone had expected that that would be the end of the controversy then they were disappointed.

Emerging from the meeting Ondo state Governor Rotimi Akeredolu who chairs the council of the six governors, said a deal had been struck.

He said the states will now go and enact enabling laws to create Amotekun and at the same time align it with federal police initiatives.

But almost immediately, Afenifere, a Yoruba cultural group which stoutly supports the new initiative, quickly dismissed the agreement saying the federal government cannot dictate how the south-west protects its people.

Similar sentiments were expressed by others on the matter, which has gived opponents of what they see as a bumbling federal government a rallying point.

The media, both old and new, is awash with stories and opinions on the subject.

Acres of newspaper space have been devoted to Amotekun, while TV and radio discussion programmes and news bulletins have also been dominated by the issue.

And social media has been on fire since the idea first came to light several weeks ago.

Most politicians do not have the luxury of avoiding this leopard. But one of the biggest political figures managed to walk a tightrope with the precision of a circus performer.

Bola Tinubu, reputed to be the most influential politician from the south-west, and whose support was critical in getting Muhammadu Buhari elected as president in 2015, was goaded into declaring a position.

With the ambition of getting President Buhari’s support for him to contest the next presidential election in 2023, and careful not to antagonise his critical base in the south-west, Mr Tinubu appeared to support both sides of the argument.

Some comments on the matter have reflected the distrust between the different regions of Nigeria.

When the veteran northern politician, Balarabe Musa, aired his views on Amotekun, he said it was the beginning of a separatist republic for the Yorubas. The reactions came thick and fast.

Nobel literature laureate, Wole Soyinka, said that “raising the spectre of secession is a facile approach to the dangerous, self-evident lapses in governance”.

The poet and playwright added that “the midwives of Amotekun have repeatedly acknowledged that theirs is only a contribution towards a crisis of escalating proportions”.

But the Attorney General and Minister of Justice, Abubakar Malami, said that the proposed regional security outfit was against the law since the constitution vests such powers in the federal government.

“Amotekun [is] unconstitutional and illegal,” he declared.

While our leaders debate points of constitutional law, hapless Nigerians, not just in the south-west but all over the country, are at the mercy of kidnappers, bandits and in the case of the north-east, Islamist insurgents.

They are killing, maiming and making people poorer as they prevent them from earning their living in peace.

Apart from those who specialise in stealing oil from pipelines, there are also the bandits who rule the roost in many towns and villages, making it impossible for many to farm or keep livestock.

This is in addition to the herders who kill and maim farmers who challenge their right of way.

I am aware of many who have abandoned their multi-million naira investments in their farms for fear of getting kidnapped if they visit.

And it is not as if the authorities are not doing anything, as they periodically deal with some of the gangs involved.

In the case of the north-west, where banditry is rife, the authorities have agreed on an amnesty for criminals who give up their unlawful acts.

This week, President Muhammadu Buhari ordered air strikes against bandits, kidnappers and cattle rustlers in forested areas bordering three states in the north and centre of the country.

He said that air raids “remain the best approach given the lack of motorised roads in the areas constantly under attack”.

But the measures appear piecemeal and suggest that something more systematic and drastic needs to be done before everyone resorts to self-help or vigilantism.

In just the past few weeks, in a sign of people taking matters into their own hands, alleged kidnappers were reportedly burnt to death by mobs in the south-eastern Bayelsa and Akwa Ibom states.

In the capital, Abuja, not only did a mob kill an alleged kidnapper, they also vandalised a police vehicle when the police tried to intervene.

What is needed is a frank discussion and agreement on measures to deal with the situation involving all tiers of government, instead of the grand-standing that distracts from tackling the criminals, who continue to have the upper hand.