Mr. George Weah, Liberia’s ex-football star, will never have a more realistic chance of winning the presidency than on October 10 when some two million of his compatriots go to the polls to replace Ellen Johnson-Sirleaf.

Of all the contenders for president, his candidacy is seen as the one that poses the most credible threat to Vice-President Joseph Boakai’s chances of succeeding Sirleaf, rendering the race too close to call as the clock ticks inexorably to Election Day.

Political pundits in Liberia say it is now or never for Weah, whose best shot at the presidency could never have put the ruling Unity Party at a more vulnerable position.

The 51-year-old retired football had gone head-to-head with outgoing President Johnson-Sirleaf in the 2005 election, losing to her as Liberians preferred experience to inexperience in the form of an educated upper class woman instead of a young upstart.

The now retired professional footballer was relying largely on his popularity as Liberia’s most illustrious player who had gone out of his way to serve his country on and off the pitch.

He is best remembered for shouldering the financial burden of the national side at a time when Liberia was engulfed in two devastating civil wars, purchasing jerseys for the team and paying for their airfares to honour qualifiers.

Born in the Monrovia slum of Clara Town on October 1, 1966, Weah’s rise to football and political stardom, is one of the most compelling rags-to-riches stories to come out of his country for a long time. 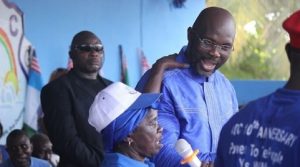 Weah’s parents were William T. Weah, Sr. and Anna Quayeweah, but he was raised largely by his paternal grandmother, Emma Klonjlaleh Brown.

He is a member of the Kru ethnic group, from south-eastern Liberia’s Grand Kru County, one of the poorest parts of the country.

He attended middle school at the Muslim Congress in Monrovia and high school at Wells Hairston High School also in Monrovia.

Before his football career kicked off abroad, Weah worked for the Liberia Telecommunications Corporation as a switchboard technician.

Plying his trade in illustrious European clubs such as AC Milan, Paris St Germain and Chelsea, he cemented his place as one of Africa’s greatest ever players after winning the 1995 World Best Player of the Year or Ballon d’Or.

He was named African Player of the Century thanks to his acceleration, speed, and dribbling ability, in addition to his goal-scoring exploits.

World football governing body FIFA described him as the precursor of the multi-functional strikers of today.

After 14 years of an illustrious football career in France, Italy and England, Weah retired from the game and announced his intention to run for president in Liberia, coinciding with the end of the second Liberian civil war.

He formed the Congress for Democratic Change and faced Sirleaf in a run-off but lost.

Although a popular figure in Liberia, opponents often cited his lack of serious formal education as a handicap to his ability to govern the post-war country, a baggage that still follows him as he prepares to run for a second time.

Analysts also point to his lack of experience, cynically referring to him as a “babe-in-the-woods”.

In the 2011 election, he ran unsuccessfully as the running mate of Winston Tubman on the ticket of the Congress for Democratic Change candidate but finally won elective office in 2014 when he contested the senatorial seat for Montserrado County, romping to victory by a 78 percent majority.