HomeNewsMelaye’s cars were his only achievement…he’s Nigeria’s worst senator ever – Smart...
News 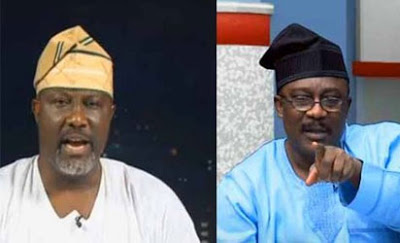 Smart Adeyemi, the newly elected All Progressives Congress’s senator, on Sunday, said his opponent, Mr Dino Melaye, in the recently held Kogi West senatorial election has nothing to show he deserves to be re-elected as a federal lawmaker, describing him as “the worst senator Nigeria ever produced”

Adeyemi added that Melaye’s only achievement as a senator was the purchase of expensive cars for personal use.

“Dino is not a good representation of the people of Kogi West,” Adeyemi said on Channels Television’s Sunday Politics.

“Dino did nothing since he was there rather than buying cars and showing it (sic) to the Nigerian people.”

Melaye often posted pictures of his expensive cars in his garage on his social media pages. Adeyemi asked his rival to explain how he was able to acquire the cars between 2015 and 2019.

Melaye later defected to the PDP in July 2018 and became a very vocal critic of the APC and its policies.

As a candidate of the PDP, Melaye again defeated Adeyemi, now of APC, in February. But Adeyemi contested his victory at the election tribunal.

Adeyemi’s misgivings about that election were upheld by the tribunal and later by the Court of Appeal, which ordered the Independent National Electoral Commission to conduct another election in the senatorial district.

The latest contest was won by Adeyemi after two rounds of elections.

But Melaye said Adeyemi’s victory is “temporal and evaporative,” vowing to contest the result announced by INEC in court.

“It is not about Dino MELAYE, it is about Nigeria and our electoral system,” Melaye wrote on Twitter on Sunday.

However, Adeyemi insisted that he won the election and that Melaye’s loss was his undoing.

“No Nigerian will want to have somebody like Dino as senator,” Adeyemi said.