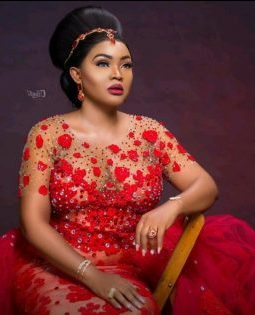 This is one “public drama” she cannot afford to weigh into at this point in time…..

Actress Mercy Aigbe will not speak publicly about the raging ‘Bride Dress’ for 40th birthday photo shoot rocking her world – for now.

And the reason is simple.

According to societynow.ng, her advisers have made her see reasons this is one “public drama” she cannot afford to weigh into at this point in time.

“The whole thing would spill over and die down by itself as long as you keep mum and focus shaping your celebration the way you want” she was advised.

But this is not to say, she won’t ever talk about it.

societynow.ng learned the actress would talk about the scandal of tainting the wedding joy of another lady for the thrills of her own 40th birthday celebration at the time she deems proper and “won’t adversely affect her image”.

The actress who just turned 40th is accused of colluding with dressmaker- Maryam Elisha- to switch a wedding dress for her 40th birthday photoshoot.

The victim, Lawretha made the development public in a post lamenting inhuman treatment by Elisha on her wedding day when she spotted Aigbe rocking the dress the day after.

Elisha operating on the social media handle Rikato By Me had owned up to the “mistake” in making the switch between Lawretha and Aigbe. And claimed to have thrown in an apology.

But the victim insists all the build-up to the discovery the actress got the dress she bought the fabric show a deliberate ploy – and she never got an apology from the dressmaker who “played her”.

While the back and forth between the victim and dressmaker rage and public comments rage – beneficiary of Elisha’s action, Aigbe maintains a deafening silence. And only carried on with her 40th birthday celebration – for reasons now revealed.