Michelle Obama made a surprise appearance on the Grammys stage Sunday to deliver a message about music and women’s empowerment alongside superstars Lady Gaga, Jennifer Lopez, host Alicia Keys and actress Jada Pinkett-Smith.

“Music shows us that all of it matters — every story within every voice, every note within every song,” said the former first lady, looking glam in a sparkling gunmetal pantsuit with a 1970s-esque wrap jacket.

“Is that right, ladies?” she said to resounding applause. The Recording Academy behind the awards gala has faced a barrage of criticism for not embracing diversity within its ranks, after nearly muting women nominees at the show last year. 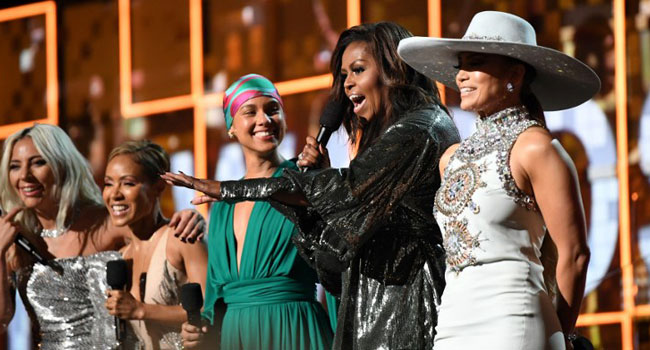 At the start of the segment, Lady Gaga — a triple winner so far on the night — said: “They told me I was weird… And music told me not to listen to them.”

Lopez — who has parlayed her successful music career into acting — said that music “kept me moving from the block to the big stages and even bigger screens.”

Pinkett-Smith added: “Every voice we hear deserves to be honored and respected.”

And Obama added: “Whether we like country or rap or rock, music helps us share ourselves, our dignity and sorrows, our hopes and joys. It allows us to hear one another, to invite each other in.” 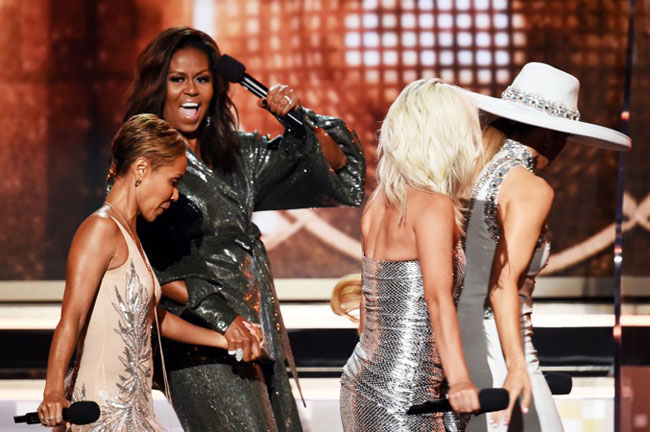 The moment came at the start of a show showcasing the female talent in the music business, one year after women were largely snubbed in the major categories.

Neil Portnow, the head of the Recording Academy, told women last year to “step up” if they wanted to do better on Grammys night.

The brazen comment drew outrage and Portnow said he would step down when his contract expires this summer. On Sunday, the message was unmistakable — one of diversity.

“Thank you so much, ladies, for your light, your message of love, your sisterhood,” said Keys, the first woman to helm the show in 14 years.

“Give it up for these magnificent goddesses!” said Keys.