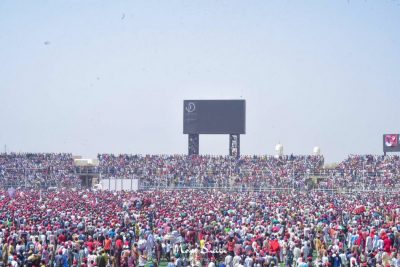 The National Chairman of the Peoples Democratic Party (PDP), Uche Secondus and a serving senator, Rabiu Kwankwaso said it is over for President Muhammadu Buhari and the ruling All Progressives Congress (APC).

This statement was made following the massive reception that the party’s presidential candidate, Atiku Abubakar received in Kano on Sunday, known as a stronghold of the APC.

Buhari secured 1.9 million votes, his highest, in Kano in the 2015 when Rabiu Kwankwaso was the governor.

But Kwankwaso, who led Atiku’s team into the ancient city on Sunday, declared that it was all over for the APC. He said the mammoth had sent a message to Aso Rock that PDP has taken over Kano.

“Today, Kano people and particularly, the youths have shown that Kano is for PDP and Kwankwasiyya,” he said.

Atiku who got into Kano at 11am did not get the opportunity to address the crowd until 6pm. Journey which should ordinarily take minutes lasted several hours.

In his speech, Atiku thanked the people for their support, promising to transform the country if elected next week.

He appealed to the crowd to vote for all PDP candidates in the election.

“Are you going to vote for PDP? If you vote for PDP from top to bottom and bottom to top, PDP government will revitalize business and the moribund industries in Kano. We will also boost agriculture,” he said.

“I will ensure that among my priorities would be the revitalization of agriculture, industries and commercial activities so as to boost the economy which has been killed by the APC government.”

Atiku said Kano is the commercial nerve of the north but has been experiencing backwardness under the APC government. 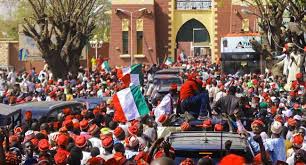 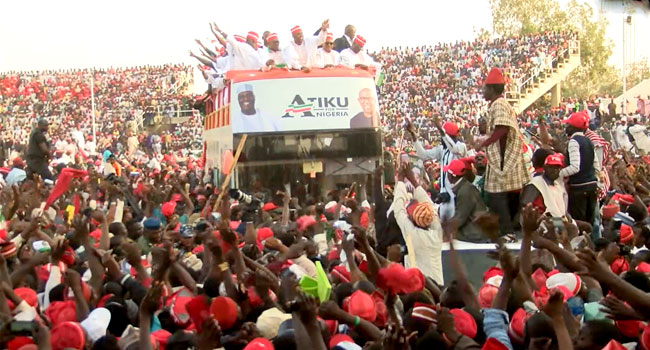